Want to see the future of transport? Watch this drone taxi go airborne 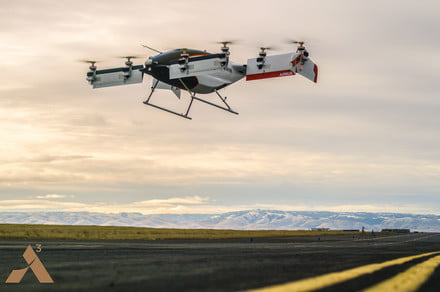 Is there a person alive who wouldn’t salivate at the opportunity of commuting to work in a self-piloting air taxi that looks like something out of James Bond movie? Vahana, an ambitious startup founded by aerospace giant Airbus, is hoping that the answer to this question is a resounding no.

To make their dream a reality, Vahana has developed a Vertical Take-Off and Landing (VTOL) single-passenger aircraft with wings and tail sections which rotate from vertical to horizontal as it takes off and lands. It’s essentially a giant self-flying drone that promises to be able to transport passengers a maximum of 62 miles at a time. Having made its maiden test flights this time last year, Vahana recently provided a 2019 update — by revealing that it has now flown 50 full-scale test flights, totaling more than five flight hours. More of these test flights, which take place at Oregon’s Pendleton UAS Range, are planned through the first half of the year.

“We envision Urban Air Mobility vehicles being used by travelers and everyday commuters as a cost-comparable replacement for short-range urban transportation methods like cars or trains,” Zach Lovering, vice president of Urban Air Mobility Systems for Airbus, told Digital Trends. “Vahana differentiates itself from competitors through its robust incorporation of self-piloting technology, its focus on advancing electric powered flight to drive down long-term maintenance costs, and its collaboration efforts with all key stakeholders throughout its progression.”

The video released of Vahana’s 50th test flight shows the aircraft moving faster and higher than previous videos. In addition, it pulls off a select few mid-air maneuvers to demonstrate just how agile it is.

While becoming the Uber of the skies (our words, not theirs) is certainly a big ambition, Lovering said that Vahana’s versatility opens up a plethora of potential applications. “Being a self-piloted vehicle allows Vahana to take on many use cases or missions,” he said. “Although we are currently focused on testing a demonstrator that would expand transportation options within our congested cities, Urban Air Mobility vehicles could [also] be used to transport heavy cargo, as a medevac service, or even to deploy emergency operations centers at disaster sites.”

Airbus’ Urban Air Mobility unit is currently aiming to deploy its Vahana air taxis sometime in the mid-2020s. We guess we’ll just have to keep on taking the subway to work until then.