The U.S. government plans to drop $500M on a ridiculously powerful supercomputer 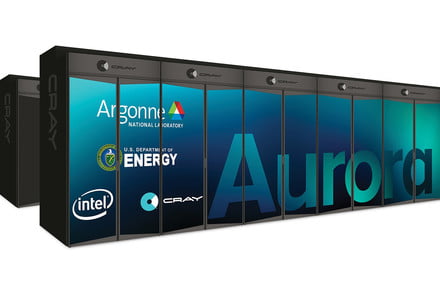 In an apparent effort to boost research projects related to public health issues and environmental science, the United States government has announced plans to build an exascale supercomputer by 2021.

The U.S. Department of Energy (DOE) formally announced its plans for a $500 million exascale supercomputer project dubbed Aurora on March 18. Once built, the Aurora supercomputer  is expected to offer a combination of “high-performance computing and artificial intelligence at exascale.”

In context, the word “exascale” refers to the fact that the Aurora supercomputer will be designed to perform at least one exaFLOP, which, according to the DOE, “is equal to one quintillion floating point computations per second.” This level of performance is expected to allow researchers “to address scientific problems at exascale” and promote the development of “new scientific innovations.”

The Aurora supercomputer’s projected capabilities and impact were further addressed by U.S. Secretary of Energy Rick Perry in a statement on the upcoming project:

“Achieving exascale is imperative not only to better the scientific community, but also to better the lives of everyday Americans … Aurora and the next generation of exascale supercomputers will apply [high-performance computing] and A.I. technologies to areas such as cancer research, climate modeling, and veterans’ health treatments. The innovative advancements that will be made with exascale will have an incredibly significant impact on our society.”

The Aurora supercomputer project will be built by Intel and subcontractor Cray, Inc. and will be located in Chicago at the Argonne National Laboratory.

Very few details about the actual technologies involved in building the Aurora have been released. However, it is expected that Intel will be building Aurora using a future generation of its Xeon Scalable processor, a future generation of its Optane DC Persistent Memory, and its Xe architecture and One API software. All these technologies will have to be specifically designed for Aurora’s unique combination of A.I. and exascale computing.