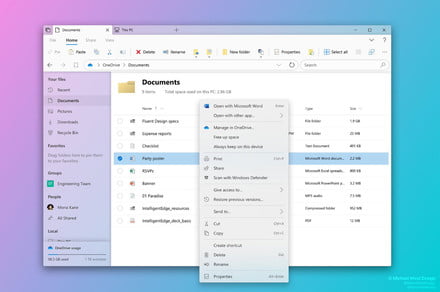 As part of the continued rollout of Fluent Design principles in Windows 10, Microsoft will reportedly extend that aesthetic and functional style to the Windows File Explorer. The report suggests that the update will be introduced in the planned 20H1 update for Windows 10, scheduled for an early 2020 release. It will first come to light in Windows Insider builds, however, so we’ll get our first glimpse of any File Explorer changes later this year.

Microsoft first introduced Fluent Design at its Build 2017 show and from there gradually introduced new apps and updated interface elements in Windows 10 with the heavily stylized aesthetic. Transparent backdrops and pastel colors abound as Microsoft looked to modernize the look of its flagship operating system. Today, much of Windows 10 enjoys that same visual flair and according to the report from HTNovo, that will extend to File Explorer in the near future.

We’ll have to wait for a new Insider build to learn what a redesigned File Explorer might look like, but we may have a hint in the form of concept art created by Windows Design MVP and upcoming intern designer at Microsoft, Michael West. While his image is unlikely to be indicative of the final Windows 10 design changes, it is made in line with Fluent Design guidelines, so shouldn’t be a million miles from what Microsoft will eventually implement.

A look at how the new File Explorer might compare with the existing one. Michael West/Twitter

The introduction of transparent backdrops in West’s changes are the most obvious visual improvement over the existing File Explorer windows, but the lefthand menu has been adjusted to fit more in line with other Fluent Design stylistic changes, like the Windows 10 Settings menu. Documents and files have been reorganized with large checkboxes next to them, much like Microsoft’s To-Do application. The contextual right-click menu has also seen some streamlining, as well as the implementation of its own transparencies. Shortcut commands are neatly listed alongside their menu counterparts and icons adorn almost all of the possibilities.

Although none of these changes are confirmed, the original report did state that Microsoft would look to better integrate the File Explorer with some of its other services, so expect Microsoft’s OneDrive to be far more prominent in the upcoming Insider builds if Explorer is refreshed as stated.