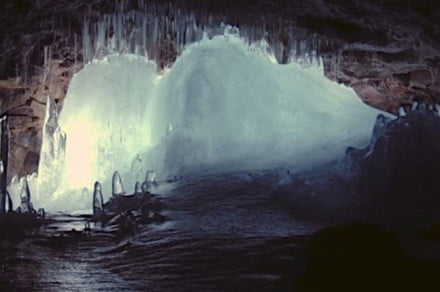 When the first humans colonize Mars, they may seek refuge in the red planet’s lava caves. Here, the pioneering martians will find protection from the extreme temperatures, radiation, and asteroids that pound the surface of the planet while establishing a subterranean base of operations. These caves may even contain water, but before they build an underground lair, they’ll need to map the cave’s interior. But how?

Researchers from the SETI (Search for Extraterrestrial Intelligence) Institute and Astrobotic Technology have demonstrated one way that astronauts may be able to map their future home. The team, led by SETI Institute planetary scientist Pascal Lee, used a Lidar-equipped drone to make a 3D map of the interior of the Lofthellir lava tube ice cave in Iceland. Not only did the team successfully map the tough-to-access cave, but it also gathered new insight into its geological history. However, the team thinks its most significant accomplishment is in demonstrating the unique way to explore other worlds.

“Our field test provides a first demonstration of a promising new concept, ‘touchless and fast,’ for exploring the many caves that exist on the moon and on Mars, some of which might be potentially rich in ice as well,” Lee told Digital Trends. “On the moon and at high altitude on Mars, the atmosphere is of course too thin to fly drones with air-foiled propellers. Instead, we would use ‘thrustered drones,’ small hovering spacecraft equipped with cold gas thrusters or other mini rocket engines.”

Lee describes “touchless and fast” as a lower risk and more efficient approach than conventional methods for exploring caves. Rather than sending rovers or dangling instruments into caves, drones don’t need to interact directly with the terrain. “Nor does the robot need to dwell inside the cave where temperatures are low, solar power is unavailable, and a communications link back to Earth is lost,” he said. “The drone needs to accept these conditions only for a very short amount of time before it exits the cave again.”

The drone used by Lee’s team was developed by Astrobotic, a private space company developing the drone-based Lidar mapping technology, which uses both visible and Lidar (pulsed laser light) imaging to fly autonomously without depending on GPS. “The drone literally builds a model of where it is in relation to its surroundings in real time, and applies what it has learned to explore further,” Lee explained.

Though the Lofthellir field test was successful, there’s more work ahead to prepare for a space drone mission. In the meantime, the SETI and Astrobotic team will continue refining their technology on Earth.


Facebook
Twitter
Pinterest
WhatsApp
Previous articleTips and tricks to get you started with your new Fitbit Inspire HR
Next articleFossil made a smartwatch in 2004, and it’s part of a new brand retrospective