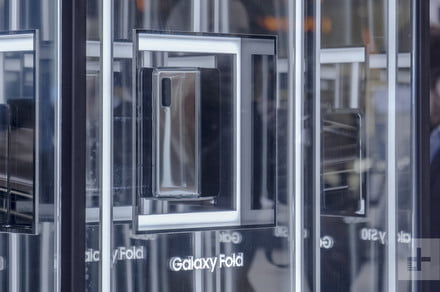 Samsung is working hard to ensure that not only does the folding smartphone become a success, but also that there is plenty of models for us to choose from. The Galaxy Fold is the first device of its type for Samsung, and it’s apparently working on an additional two folding smartphones, one of which may be out before the end of the year. The news comes from anonymous sources speaking to Bloomberg, and soon after the Galaxy Fold’s announcement in February.

A screen on the outside of the device is likely to be considered an essential by owners though, as without it, the phone would have to be opened to see notifications, the time, and perform other quick actions. This device may be revealed in late 2019, or early 2020. After this, it’s claimed Samsung has another foldable smartphone to launch, and it’s one with an “out folding” screen.

Adopting this design would see Samsung follow in Huawei’s footsteps, as the Mate X’s screen folds outward too. Sources told Bloomberg the outward folding smartphone is at prototype stage now, and due to not having an external screen, it will be thinner than the 17mm thick Galaxy Fold. Other possible features include an in-display fingerprint sensor for future folding smartphones.

Samsung has been working on folding smartphone and screen projects for nearly eight years. It beat rival Huawei to being first to announce a modern folding smartphone, after revealing the Galaxy Fold on February 20. However, the phone has remained under cover since then, with no public reports on what the device is like to use. The $1,980 Galaxy Fold will be released on April 26. Huawei’s Mate X — which has been considerably less elusive — was shown at MWC 2019 a week after the Galaxy Fold and will be out before the end of the summer.