Home News Another giant leap: U.S. plans to send astronauts back to the moon...
News

Another giant leap: U.S. plans to send astronauts back to the moon by 2024 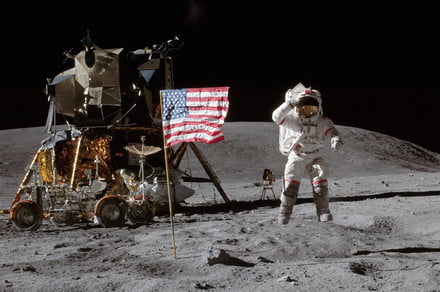 “It is the stated policy of this administration and the United States of America to return American astronauts to the moon, within the next five years,” Pence said in a speech delivered in Huntsville, Alabama. “Let me be clear, the first woman and the next man on the moon will both be American astronauts launched by American rockets from American soil.”

Pence’s announcement was given at a meeting of the U.S. National Space Council. The meeting took place at the U.S. Space and Rocket Center, the facility where much of the construction on the long-awaited, eagerly anticipated Space Launch System (SLS) is being carried out. The SLS will be the most powerful rocket in existence when it is completed. Intended to replace the retired Space Shuttle, it is a super-heavy-lift expendable launch vehicle, designed to be part of NASA’s deep space exploration plans — including a possible crewed mission to Mars. Despite the excitement surrounding the SLS, however, the project has been the victim of many delays and severe cost overruns.

During the meeting, Pence said that it is crucial to speed up the SLS project’s development. He also suggested that it might be possible to use commercial rockets for the 2024 (or earlier) lunar mission. “We’re not committed to any one contractor,” he noted, as reported by New Scientist. “If our current contractors can’t meet this objective, then we’ll find ones that will.” He added, “if commercial rockets are the only way to get American astronauts to the moon in the next five years, then commercial rockets it will be.”

According to Pence, the mission could seek to land American astronauts on the moon’s south pole. This part of the moon contains water ice. In the future, he claimed that American-led missions could attempt to extract some of this water, as well as mining oxygen from lunar rocks as a way of refueling spaceships.