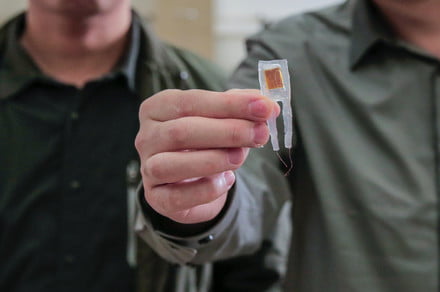 There is no shortage of researchers aiming to make ingestible smart sensors, designed to keep tabs on what’s happening in your guts, and sending this information to a paired mobile device. But a new device, created by engineers at the University of Wisconsin-Madison, does more than passively observe your internal goings-on. Instead, it actually prompts overweight individuals to lose weight by attaching to the outside of the stomach and then dampening down feelings of hunger on the part of the “wearer.”

“We developed an implantable device to stimulate [the] vagus nerve with a purpose to reduce food intake,” Xudong Wang, a professor of nanoelectric systems and biomechanical energy at UWM, told Digital Trends. “It is a smart and self-responsive device without any electronics and power supply. It produces electric pulses in response to stomach movements, and transmits them through the vagus nerve to the brain as an artificial fullness signal [able to] prevent further eating.”

There is already an implant approved by the Food and Drug Administration, developed by the company ReShape Lifesciences, which uses electrical jolts to interfere with the way that the vagus nerve and the brain communicate. That is similar to the approach that Wang and fellow researchers take, but it has the major disadvantage of involving batteries that require recharging. The UWM device, on the other hand, is able to generate up to 0.5 volts simply based on the natural movements of the stomach. While a tiny amount of electricity, this is still sufficient to stimulate the nerve into action.

At present, this new nickel-sized implant has yet to be tested in humans. Instead, it has been put through its paces in studies involving rats. In the experiment, the rats equipped with the device had a weight that was 38 percent less, compared with normal control rats, following a 100-day study. Extrapolated to humans, the researchers behind the project think this could be helpful in fighting the United States’ obesity epidemic, something which affects tens of millions of Americans.

“[Next] we want to test it on big animals, such as [a] pig, that has more similar weight to humans, and eventually move to human trials,” Wang continued.