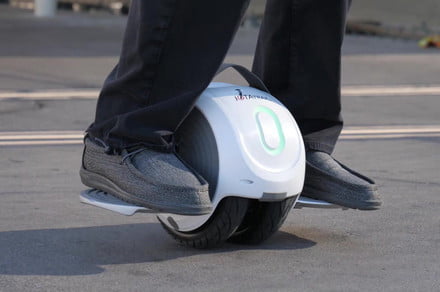 CES is all about the coolest new products ready to rock our worlds in the near future. However, with all the fuss being made about what awaits us in 2019, it can be too easy to forget about the gadgets, innovations, and assorted announcements that turned our collective heads back at last year’s Consumer Electronics Show.

Here’s what happened to the 14 prize-winners we considered our personal picks of last year’s CES.

The Kate Spade Scallop was our pick for CES 2018’s best wearable device, a category which looked set to define 2018. As we wrote at the time: “The Scallop is slim, simple, and elegant. From the spade icon on the crown to the scalloped bezels, the beauty is in the details. There aren’t a lot of smartwatches for women that are this well thought out, and that’s why the Scallop is our pick.”

One year on, the Kate Spade Scallop isn’t a game-changer on a par with, say, the ECG-boasting Apple Watch Series 4. But our in-depth review, published back in May, did show that our CES faith in the product was well-placed. “While it’s more expensive than other women’s smartwatches, you’ll get your money’s worth,” Digital Trends wrote. “The Kate Spade Scallop is a fashion-forward timepiece with a versatile look you can wear for any occasion.”

Of all the gadgets to make “smart,” a mirror isn’t necessarily the first one we’d think is in need of a cognitive overhaul. But credit where it’s due: we were impressed enough by Kohler’s Amazon Alexa-enabled smart mirror to give it our CES 2018 Smart Home award.

The mirror essentially plays the role of smart bathroom hub: letting you listen to music, get details of your day’s schedule, and more, without having to move from standing in front of it. It’s a neat idea, even though the smart home remains in its relative infancy.

One year on, and Kohler is continuing to expand its smart bathroom range (smart toilet, anyone?), while the Verdera smart mirror is available for sale for whoever wants it. It also now offers Google Assistant integration, for those not plugged into the Amazon ecosystem.

We were just as impressed when it came time to do our in-depth review a few months later. No image stabilization and a chintzy rear control dial were the only nits we could pick in what was otherwise a great package, which remains a tremendous video camera one year on.

Interestingly, in last year’s CES awards write-up, we questioned whether the rise of drones, 360, and VR cameras would make this the “last traditional camera to garner a CES award from us.” Will that prediction hold true for our 2019 roundup? Make sure to check back to see.

There are always enough rideables at CES to put together an impromptu Fast and the Furious movie, but the one which ultimately caught our eye at last year’s event was the IotaTrax. Standing (well, rolling) as a cross between a hoverboard and a self-balancing unicycle, it promised to be both easy to use and easy to transport: the best of both worlds.

Jump forward one year and the IotaTrax is available for sale, currently at a reduced rate of $399.

Thanks to Apple’s Face ID, here in 2019 the idea of unlocking a flagship smartphone using our fingerprints sounds kind of antiquated. In early 2018, however, the tech world was still buzzing about the concept of fingerprint scanning using sensors embedded directly in the display.

This was tech that, according to rumor, Apple had failed to pull off. But handset maker Vivo had seemingly managed it — and the results were on display at CES 2018. The Vivo X21 wound up making its international debut in mid-2018, and — just as we had predicted at CES — the reviews were pretty darn good.

The one thing we were wrong about? Our prediction that readers should “Expect this tech to be a major trend on phones in 2018.” It turns out that, even though this technology works, average users just aren’t as wowed by fingerprint recognition as they once were — and handset makers have listened.

When it came to our pick for best appliance at last year’s CES we went for GE’s practical yet innovative Appliances’ Kitchen Hub. A 27-inch screen mounted above your oven, this gadget functions as both ventilation system for your stove, smart home hub, and display for video chat or for searching through various preloaded recipes and video tutorials.

Originally, the Kitchen Hub was planned to be released in the fall of 2018 with a price tag of $600. Now it appears to have been pushed back to May 2019, with costs ranging from $1,200 to $1,400 MSRP. Despite the delay and price hike, it still looks pretty darn intriguing.

Our favorite drone at CES 2018 was Uvify’s Oori drone: a UAV small enough to fit in the palm of your hand, yet capable of hitting 60 mph in short order. Designed as an entry point into the fast evolving sport of drone racing, the Oori drone was the stuff aerial dreams are made of.

Twelve months later, we’re not regretting our pick whatsoever. Drone technology may be moving on all the time, but this is as fun as it was in Las Vegas, circa January 2018. Available for sale right now.

Yes, beauty-focused tech can be a bit of a gimmick, but we were genuinely impressed enough by L’Oreal’s UV Sense to make it one of our CES 2018 prize winners. Taking the form of a small, button-like, battery-free device that adheres to a thumbnail, sunglasses or watchband, and measures sun exposure and other environmental factors, this looked like a game changer for wearables.

A pilot program for the tech launched in the U.S. last summer, before it launched under the name La Roche-Posay My Skin Track UV Sensor in late 2018, priced $60.

3D printers have been around for a while now, but the majority of them are still able to print only plastic pieces. That’s why we were so excited to see the Desktop Metal Studio 3D printer at last year’s CES: a machine which promised to provide us with a means to produce metal parts without resorting to a CNC mill or other high-end industrial technology.

To do this, the printer uses a special filament made of superfine metal particles held together with a dissolvable binder. It then carries out a sintering process to fuse the metal particles together. We were suitably wowed. Since then, Desktop Metal has gone from strength to strength by adding new tools to its arsenal. The result is one of the most exciting companies in 3D printing.

Dell’s XPS 13 laptop was our favorite laptop at CES 2018: a beauty of a machine that managed to be impressively slim, pack an 8th-gen Intel quad-core processor, optional touchscreen and more. Jump forward to the world of 2019 and our verdict hasn’t changed. As we wrote in on our in-depth review: “The Dell XPS 13 is still the best 13-inch laptop you can buy.”

We couldn’t help but be blown away by the quality of Sennheiser’s HD 820 headphones, which somehow managed to look every bit as good as they sounded. When they shipped later in 2018, they turned out to be every bit as superb as they seemed at CES, surrounded by hundreds of other high-end products. An audio tour-de-force which remains a winner in 2019.

As we wrote last year: “Showcasing how the oft-overlooked hydrogen fuel cell technology has matured, the Nexo is a production model built specifically to run on the alternative fuel. It’s an SUV as well, so there’s the added bonus of more utility than what’s offered by the diminutive four-door fuel cell production cars. Providing roughly 135 horsepower and 291 pound-feet of torque, the Nexo has 370 miles of driving range while offering the same level durability as a comparable gas-powered vehicle.”

Since then, the Hyundai Nexo has racked up plaudits, such as being the first hydrogen fuel cell electric vehicle (FCEV) to score a maximum five-star Euro NCAP safety rating in Europe. It’s clear that this is the kind of game changer that we thought it would be when we handed out our automotive award for the best tech of CES 2018.

“This year, Nvidia showed off what might be the most consequential piece of car technology for years to come: the Xavier system on a chip.” That was our breathless excitement at the prospect of Nvidia’s Xavier processor, a “supercomputer folded into the size of a license plate” that promised to help carmakers finally deliver on their biggest, ambitious self-driving dreams.

Nvidia hasn’t skipped a beat since then — with CES 2019 seeing it build on its Xavier system-on-a-chip to announce that its new Drive AutoPilot is the first automated driving system which meets standards for Level 2-plus autonomous cars.

When there’s technology we describe as “the most impressive advancement of TV technology we’ve seen in years” it would be, frankly, rude not to hand it one of our awards for the best that CES 2018 had to offer. This was the kind of promise made by Sony’s X1 Ultimate chip, a TV processor th at… well, when’s the last time anyone got excited about one of those? Exactly!

Here in 2019, the X1 Ultimate chip has popped up in a number of different television sets, including Sony flagship TVs, the Master Series Z9F LED and A9F OLED. And we’re just as enamored as ever.