Science attempts to settle a long-running dispute among Brits 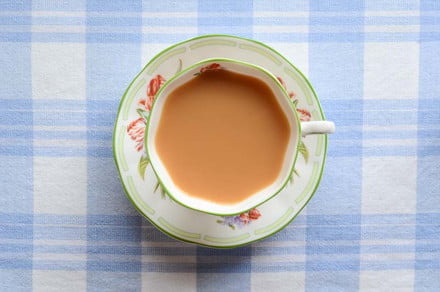 It’s an issue about which every Brit has a strong opinion; one that can lead to lively conversations, impassioned debates, and even heated arguments. In a worst-case scenario, it can descend into a slanging match full of expletives.

Making the perfect cup of tea is a hugely controversial matter in the U.K. Arguments abound over whether to add the milk before the water or vice versa (or whether to put milk in at all), how long to let the tea bag steep, whether to squeeze it,  how much sugar to add (or not) … and so on.

It should be noted that while the act of forgoing loose leaves in favor of tea bags will be considered by most purists as an unforgivable deed bordering on the scandalous, the convenience of the little packets of dried leaves means it’s the method of choice for most Brits.

Indeed, it’s the humble tea bag that features in a recent BBC show (above) that turned to science to try to discover how to make the perfect cuppa.

Calling on the services of scientist and expert tea maker Stuart Farrimond, presenter Cherry Healey sets out to learn the dos and don’ts when it comes to knocking together a brew.

Healey starts off by showing Farrimond how she would usually make a cup of tea, though instead of a teacup or mug, she uses a styrofoam cup similar to what you get from a drinks machine.

Healey’s routine involves first putting the tea bag in the cup, followed by the hot water, and then squeezing the bag while saying, “La-la-la-la.” Note: It’s not clear if this unexpected utterance is part of her usual routine, perhaps performed in the belief that it helps to infuse the full flavor of the tea into the water, or merely a habit she’s had since childhood, but it’s really not thought to make any difference to the taste of the drink.

Casting a critical eye over the final result, Farrimond comments somewhat harshly that the effort “leaves a lot to be desired.” Why? For starters, that styrofoam cup is actually good for nothing (apart from stopping the drink from going everywhere, obviously). Such cups absorb flavor molecules, the scientist explains, taking the taste down a notch even before you’ve had a chance to sip it.

Avoiding hard water is also very important, according to Farrimond, as the calcium within it causes a chemical reaction that not only reduces the tea’s flavor, but also produces an unattractive scum.

With no word on the eternal water-before-milk-or-milk-before-water debate, Farrimond instead focuses on preparation time, telling Healey to make a cup of tea by letting the bag steep for a full five minutes — way longer than most people have the patience for. The presenter obliges, and, thankfully, refrains from saying “la-la-la-la” the whole time while the drink sits there.

Leaving the tea to steep for longer boosts not only the flavor, but also the drink’s levels of antioxidants and caffeine, says the scientist.

With the drink finally ready, the presenter performs the all-important taste test.

“This actually has flavor,” a wide-eyed Healey says with so much enthusiasm that you can’t help wondering if she’s been drinking something akin to dirty bathwater all her life.

So there you have it — how to make the perfect cup of tea. Perhaps.