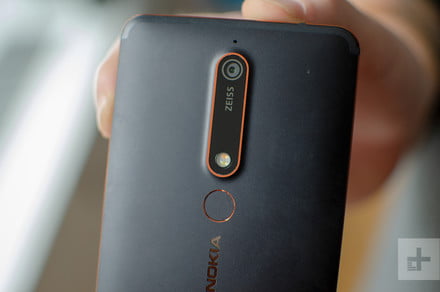 The Nokia 6.1 was our favorite budget phone of 2018, surpassing long-time champion Motorola, and fighting off strong entries from Huawei and other brands that usually have the budget market sewn up to themselves. So when rumors began to reach our ears of a successor — the Nokia 6.2 — you can be sure our ears perked up.

While we really don’t know much at this point, there is a small amount of information to pick through. Here’s absolutely everything we know about the Nokia 6.2.

While the Nokia 6.1 was a heck of a phone, it came with some chunky bezels that detracted from the overall look. It doesn’t seem the Nokia 6.2 will share that handicap though, if some rumors are true.

According to Twitter user Nokia_Leaks, the Nokia 6.2 will come with a massive 6.2-inch screen, complete with a pinhole-style for the selfie lens. A display that size would lead us to believe a phone’s bezels have been substantially reduced, and the inclusion of a punch-hole for the front-facing camera lens pushes that idea even further. If these leaks are correct, then the Nokia 6.2 could be the great looking budget phone to kick off 2019.

As a budget phone, you won’t be getting flagship-level specs with the Nokia 6.2, but you should get a good amount of bang for your buck. According to Nokia_Leaks’ tweet, the Nokia 6.2 will see a minor upgrade over its predecessor, thanks to the Snapdragon 632. Options for 4GB and 6GB of RAM should keep the phone breezing between multiple apps. That same tweet also claims we’ll see a return to a dual-lens setup, with two 16-megapixel lenses optimized by Zeiss.

With so few details available, you might expect the Nokia 6.2 to be months away. Well, apparently not. Nokia_Leaks puts the release date of the Nokia 6.2 as being late January to early February. However, the first market that will see a release will be China, which means it may take a little longer to hit the U.S. and other regions. Some commentators say the phone is most likely to launch in those regions at MWC 2019, alongside the Nokia 9 PureView. In terms of price, we expect a budget price of around $300.

That’s all we know about the Nokia 6.2 so far — keep your peepers peeled for more.