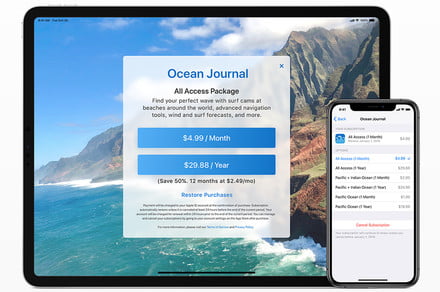 It’s sometimes tricky to know where you are with in-app subscriptions, and before you know it you’ve signed up to something without realizing the full cost. It’s often down to the sometimes sneaky way that some developers incorporate details of such purchases into their software, leading to more sales than they might otherwise have achieved.

For those with iPhones and iPads, Apple is now having a stab at addressing the issue after updating its guidelines to encourage developers to be more up front with cost information when it comes to in-app subscriptions.

Spotted by 9to5Mac, the new information states more plainly that the actual billing price of a subscription must be clearly shown to those using the app.

Apple says, for example, that the total amount for an annual subscription should be shown prominently on the display so the user knows exactly how much they’ll be paying when they hit the buy button. The company says that while it’s fine for the app to present a breakdown of the equivalent annual price, or the savings when compared to weekly or monthly subscriptions, “these additional elements should be displayed in a subordinate position and size to the annual price,” adding, “This ensures that users are not misled.”

In addition, for extra clarity, Apple suggests to developers that when describing the methods of charging and subscription management, they could use text similar to the following:

“Payment will be charged to your Apple ID account at the confirmation of purchase. The subscription automatically renews unless it is canceled at least 24 hours before the end of the current period. Your account will be charged for renewal within 24 hours prior to the end of the current period. You can manage and cancel your subscriptions by going to your App Store account settings after purchase.”

To cancel a subscription,  hit Settings on your iOS device, then iTunes & App Store, and then tap on your Apple ID at the top of the display. Next, hit View Apple ID and enter your password or fingerprint when asked. Then it’s a case of tapping Subscriptions to reveal the ones you have running, and selecting any that you want to cancel before confirming your decision.

Apple also insists that an app with a free trial must clearly show how long the free period will last and state that a payment will be automatically charged to the user’s account once the trial is over — if they choose not to cancel the subscription beforehand.

We’ll have wait to discover the impact — if any — of Apple’s revamped developer guidelines, and also if Apple will take steps to enforce its rules.

Subscriptions have become a popular way for app developers to monetize their work. Other options include selling the app in a one-off purchase, or giving it away for free and generating revenue via ads.

The best bird guide may be on your smartphone. Here are some of our favorite birding apps for iOS and Android.
Read more
Software