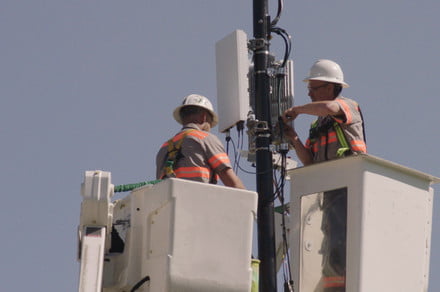 Verizon is in a cutthroat competition with AT&T to be the first carrier to offer 5G. While you may think Verizon already claimed that title, it actually launched a pre-standard 5G network that AT&T (and others) claim is not “real 5G.”

Will Verizon beat AT&T to the punch to be the first U.S. carrier to offer standards-based 5G? Here’s everything you need to know Verizon’s massive 5G rollout.

Verizon wants its 5G to offer impeccable speeds with low latency. To meet those demands, Verizon will initially deploy its 5G network on millimeter wave spectrum (mmWave). And while mmWave will undoubtedly offer the fastest 5G experience, it has its flaws

Verizon will initially roll out its 5G service on 28 GHz spectrum. One of the challenges with using the high-band spectrum is that it does not cover a large area, and penetration is a serious challenge.  Over the next several years, Verizon will build out its 5G network around the country using small cells, and will eventually deploy service on a mid- and low-band spectrum.

For the next several years Verizon’s 5G service will piggyback off its massive 5G network. Expect to see 5G service in larger cities and busy places like airports and stadiums, but you will be unlikely to see the service in the suburbs and rural areas for years to come.

Although Verizon will release standards-based mobile 5G (5G NR) in 2019, it has yet to provide details on the exact location. Expect to hear more details in the very near future.

When it comes to mobile hardware, there’s not a lot to report. Right now, Verizon has confirmed three mobile devices with 5G modems.

In August, the carrier announced the Moto Z3 with 5G compatible Moto Mod. A release date has yet to be announced for the Moto Mod, however, we expect to see it in the first half of 2019.

In December, Verizon announced two new pieces of hardware. The first is an upcoming Samsung-branded 5G smartphone. More details will be announced in the coming months, and the handset will be released in the first part of 2019.

Verizon also closed out the year with a 5G mobile hotspot announcement. The carrier tapped Inseego to create the MiFi 5G hotspot. The hotspot will be released at some point in 2019.

Verizon will likely be the first carrier to roll out fixed 5G. In October, the carrier rolled out pre-standard fixed 5G in parts of Houston, Indianapolis, Los Angeles, and Sacramento.  The service is available for $50 for current Verizon subscribers and $70 for those who want to standalone service.

Expect to see the pre-standard 5G replaced with 5G NR in the coming months as the city updates its hardware and software. Verizon plans to deploy fixed 5G to additional locations across the country in 2019, though it has not named cities just yet.

Since Verizon already has fixed 5G service in four cities, it makes sense it would have the hardware. The carrier partnered with Inseego to release its first 5G home router.