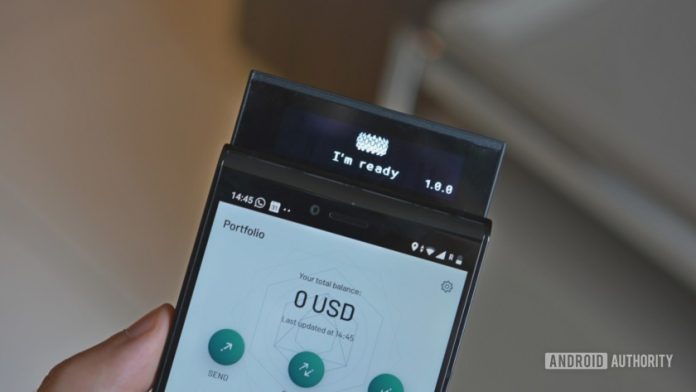 Hodl (ˈhɒdəl; verb; often written HODL): Slang for holding a cryptocurrency rather than selling it. Can also mean Hold On For Dear Life.

We’ve seen a few weird and wonderful phones this year, but the Finney is probably the most bizarre yet.

The creation of Israel-based Sirin Labs, the Finney is designed for a very specific group of people: crypto fanatics. Company reps openly admit the Finney probably won’t appeal to mainstream users, but they still see a large addressable market for it. Sirin hopes to sell over 100,000 units, which is puny compared to the Samsungs and Huaweis of the world, but a real feat for a $1,000 ultra-niche product.

Cryptocurrency wallet guide — everything you need to know

To put it simply, a cryptocurrency wallet is similar to a bank account. It lets you monitor your balance, make and receive payments, and see all your transactions in one place. You need …

I went into Sirin’s launch event with low expectations and more than a little skepticism. We saw similar lofty promises and fanciful designs before, after all. The ill-fated Saygus and Turing come to mind.

After playing with the phone and talking to Sirin executives, I still have questions, but I no longer think the Finney is vaporware. The hype is manufactured — Sirin had freaking Leo Messi talk about the benefits of decentralization — but the Finney is a real product, with a real, albeit very specific, selling point. 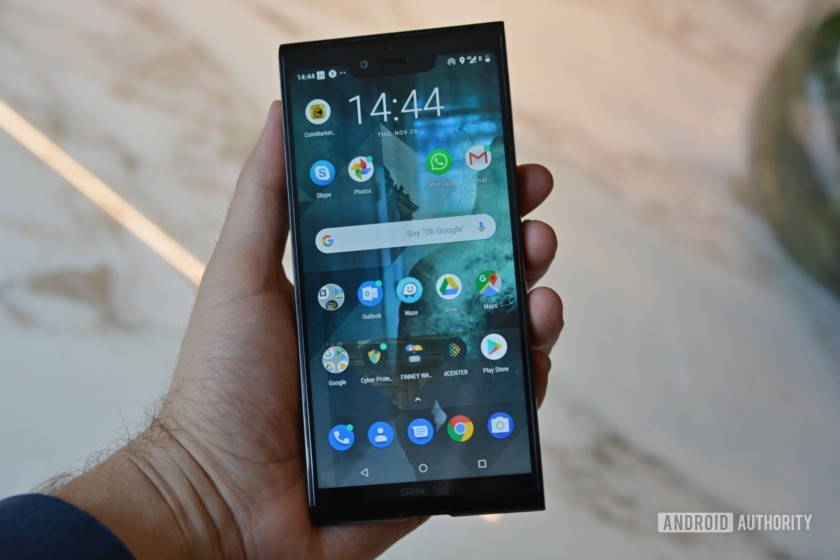 First, let’s talk about the Finney’s distinctive looks. The phone’s a massive slab, with slightly concave metallic sides and tapering glass on the top and bottom. The robust proportions are meant to inspire resilience and safety, and the Finney looks like it could stop a bullet. The thickness of the device (around 9.3mm) is actually due to the secondary screen embedded on the rear, which serves as a cold storage crypto wallet. 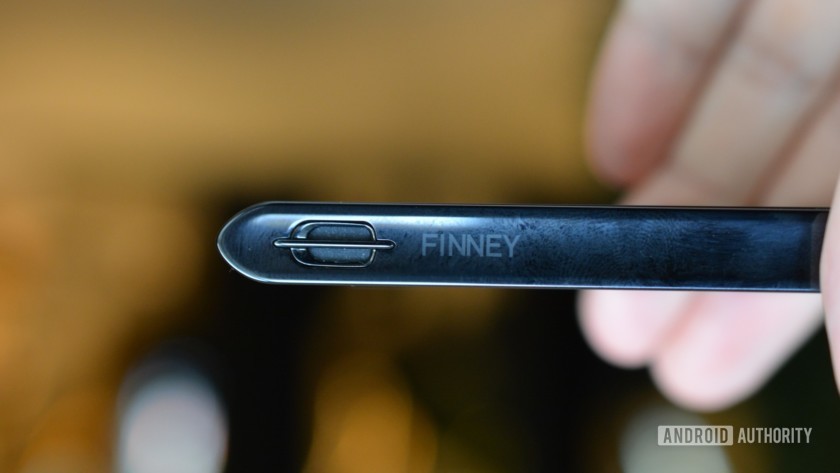 The Finney looks like it could stop a bullet

The wallet pops up from the top of the phone, a bit like the pop-up camera on the Oppo Find X. The screen is not actuated, so you’ll need to open it manually by pushing on the smooth glass back, which is a bit hard to do. It shouldn’t be an issue, as the wallet is meant to stay closed 99.9 percent of the time — you’ll only need to open it to verify crypto transactions, which shouldn’t take more than a few seconds. 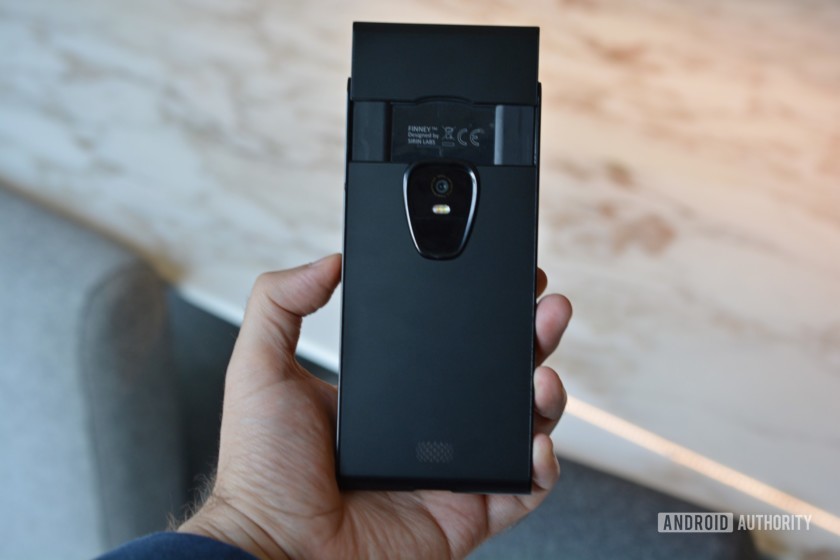 I’ll talk more about the functionality of the cold storage wallet later, but I will say that I have some doubts about the hardware. The secondary screen – which is actually touch-enabled – feels a little flimsy and tends to pick up gunk and debris. But that’s the price you’ll need to pay to have a cold storage wallet built into your smartphone. 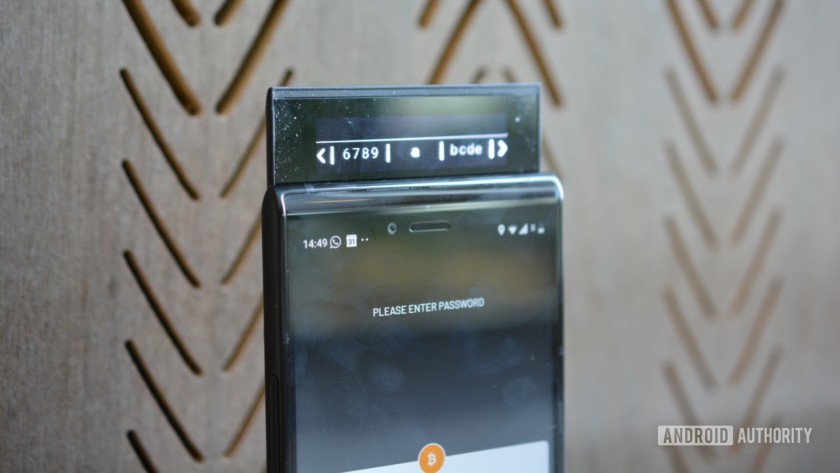 It should go without saying, but please don’t drop your $1,000 blockchain phone in the water – the Finney is only rated IP54, probably due to the sliding mechanism on its back.

The most distinctive design element is the metallic “shield” on the back, which surrounds the camera and the fingerprint sensor. It’s an evocative touch (shield, get it?) carried over from Sirin’s previous phone, the $16,000 Solarin.

On the sides, you’ll see the fat power and volume buttons, the SIM tray, and large speaker grilles on both sides of the device.

I get the message Sirin wanted to convey, but a smartphone needs to be practical and the Finney is hardly that

The Finney is unwieldy. It’s lighter than it looks, but its flat metallic edges and overall thickness make it a pain to use with one hand. I get the message Sirin wanted to convey, but a smartphone needs to be practical and the Finney is hardly that. 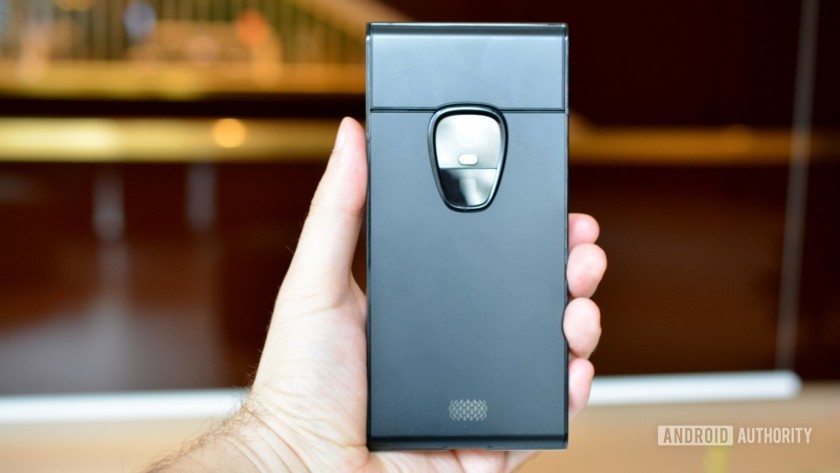 The phone will initially be available in gray and matte black. I preferred the stealthy black one personally. A white option will come at a later date.

The display of the Finney is a Full HD LCD panel. It has a notch, of course, even if the thick bezels don’t call for it. The display looks a bit washed out, especially at an angle. It’s not what you’d expect from a $1,000 phone. The pixel density of the 6-inch screen is pretty good at least. 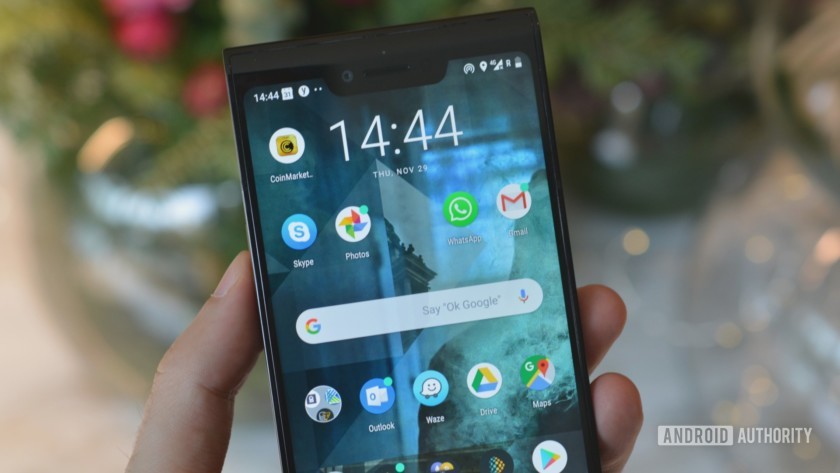 Under the ostentatious bonnet, the Finney hides solid, if fairly pedestrian specifications. These include a Snapdragon 845 processor, 6GB of RAM, 128GB of storage, a 3,280mAh battery (small for the size of the phone, I must say), a 12MP main camera, and an 8MP front one. There’s also a microSD card slot and the aforementioned fingerprint sensor and dual speakers. There’s no 3.5mm jack slot.

I didn’t see any performance issues, with everything running as smoothly as expected

I didn’t see any performance issues, with everything running as smoothly as expected during my brief time with the phone. 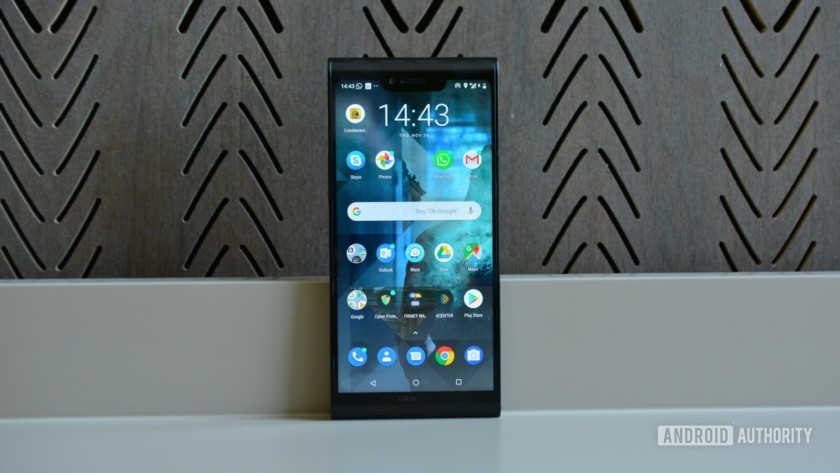 The Sirin Finney runs a very stock-looking version of Android 8.1 called Sirin OS. There are very few user-facing custom features, the most notable being the ability to add PIN or pattern protection to specific apps. There are also a few preloaded Sirin apps: an antivirus-like “cyber protection” suite; a crypto app that lets you convert, send, and receive cryptocurrency; and an app store for decentralized apps. 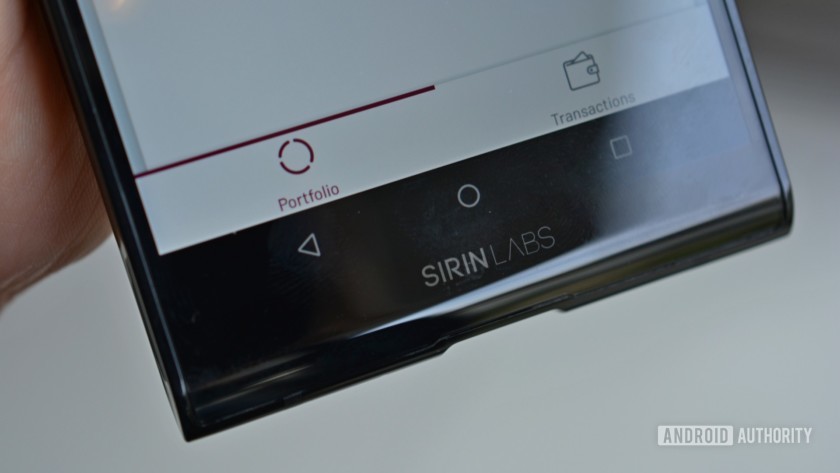 Sirin started life as a security startup, focusing on hardening Android against attacks. It pivoted to blockchain phones when Bitcoin shot through the roof in 2017, but security remains the big focus of Sirin OS. The company claims to have made many changes to Android starting at the kernel level, creating a “multi-layered cybersecurity suite” apparently more secure than Google’s stock software. Sirin says it had third-party companies test its software, but there’s no public security certification as far as I can tell.

The Finney is actually meant to be a showcase for Sirin OS, as Sirin Labs shops it around to other OEMs. The company said it’s talking to several important industry players to license Sirin OS, but didn’t offer more details.

The most important feature of the Sirin Finney is its cold storage wallet. Without it, the Finney would just be an expensive, flashy smartphone from an unproven company. With it, it’s still expensive and flashy, but also potentially compelling to millions of people in the crypto community.

When the secondary screen is tucked into the phone, the wallet is powered off and ostensibly immune to attacks. That’s what makes it a “cold” wallet and ideal for storing large amounts of crypto money. When the screen is popped out, it boots up and becomes a “hot” wallet, accessible to the software on the phone. The wallet has its own hardware and is essentially a separate device that connects to the phone through a hardware-based firewall. To access the wallet, you’ll need to enter a password by scrolling through a list of characters displayed on the 2-inch touchscreen. It seems almost primitive, but this approach means the wallet should stay safe even if hackers manage to compromise Sirin OS.

Besides storing your crypto keys, the wallet lets you generate QR codes for receiving funds, which you can then share through any method. It also allows you to verify blockchain addresses for sending funds. In effect, the Finney incorporates an exchange. The exchange rates are refreshed every ten seconds, and Sirin takes a small cut of every transaction, much like any other exchange. For now, the Finney supports Bitcoin, Ethereum, and Sirin’s own token, SRN (more coins will be added in the future). To be clear, the phone does not allow you to convert cryptocurrencies to legal tender like U.S. dollars or euros.

As I mentioned in the opening of this article, the Finney is definitely weird. It sticks out through its design, its cold wallet storage, and even the way you’re able to buy it (purchases can only be made in crypto, at least for now).

Is it wonderful? Frankly, I don’t know enough about crypto to give you a verdict.

Hardcore crypto hoarders might want a phone with its own cold storage wallet, or maybe they’ll prefer the safety and flexibility of the solutions they already use. Maybe they’ll want it for the phone’s dead simple exchange system, or maybe they’ll just stick to online exchanges, which offer more currencies and maybe better rates.

Let’s get it out of the way. You’ll probably want to buy the Mate 20 Pro. It’s sexy, it’s powerful, it’s one of the best phones you can get right now. The real question is if …

As for crypto newbies, will they find enough benefits in the Finney to justify its high cost?

One thing is very clear. The Sirin Finney is not for me. It’s probably not for you either — not unless you’re deeply invested into crypto. If you don’t care about crypto at all, there’s literally no reason to buy the Finney, other than its exotic allure. For a thousand bucks, you can get better premium smartphones and numerous cheaper ones with similar core experiences. If you only casually dabble in crypto investment, the Finney offers convenience and security, but I am not sure it’s enough to justify the investment.

What do you think of the Sirin Finney? Let us know your thoughts in the comments!