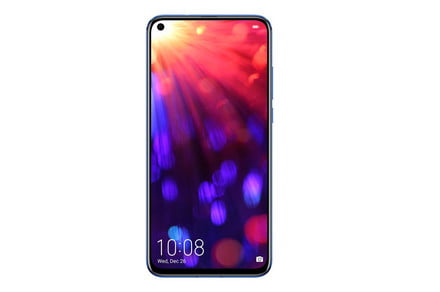 Huawei sub-brand Honor has launched the View 20 in China, and will show exactly the same phone in Paris near the end of January — the device’s international unveiling. Digital Trends was invited to see the phone ahead of its announcement, and to learn more about why this phone could signal a turning point for the Chinese company.

The Honor View 10 was a great phone, with strong specifications for a tempting price, but it didn’t look very pretty. The design, especially the circular, individually-mounted camera lenses, became a template for other Honor devices — but it couldn’t be described as a thing of beauty. The Honor View 20 is different. It looks superb from the front, and has a great stylistic touch on the back.

Made from metal, the View 20 has a reflective surface — Honor calls it Light For Honor, a 300 nanometer, multi-layer super-micro pattern — which has a V-shape flowing through it that’s only visible when the light catches it. The phone comes in midnight black, phantom blue, and phantom red, and the V-shape on each shiny View 20 color appears like it’s emerging from a pool of water. It looks excellent, gives the View 20 some character, and ensures the slightly dull View 10 is only a memory. It’s also a design feature Honor can draw on in the future too.

Around the front is a new type of screen. Honor calls the Full HD+ resolution, 6.4-inch, 19:25.9 aspect ratio screen the All-View Display, and it uses a small punch hole in the top left rather than a large, central notch to conceal the camera and associated sensors. We’ve already written about the All-View Display in-depth here, but we’re also happy to add that it looks not only suitably different; but also really exciting. When you hold the phone in landscape, it’s hidden under your hand, and you get that highly desirable full-screen look. The Honor View 20 has a massive 91.8-percent screen-to-body ratio.

The V-shape on each shiny View 20 color appears like it’s emerging from a pool of water.

The punch hole in-screen camera is subtle, technically impressive, and functional too. It doesn’t distract, it doesn’t look that awkward, and at the moment makes the View 20 stand out. That may change in the future as more phones include the punch hole — Honor will use it on more devices too — but for now it’s a neat solution to the problem of where to put the camera on almost bezel-less devices. In our brief test, it didn’t affect the screen’s performance at all, but we did not have a chance to watch video for any length of time, or use the device in daylight.

Putting the front camera somewhere new is a risk, as it still needs to work in a seamless, natural way. We tried the selfie camera, and found you’ll have to adjust your grip to use it naturally, as it’s deeply offset on the front of the phone. This means framing can be a little strange at first, but it’s easy to get used to it. The in-screen camera has 25-megapixels, and various artificial intelligence features for bokeh and beauty. It’s joined by a single camera lens on the back too. That’s right, the View 20 has a single camera lens, but it’s a very special one.

The Honor View 20 is the first phone to use Sony’s IMX586 sensor, which has 48-megapixels. It’s a big sensor, and has been squeezed into the 8mm thick body alongside 3D Time-of-Flight sensors to measure distance for bokeh and portrait shots, and enable high quality 3D modelling and pinsharp augmented reality, much like a Microsoft Kinect. We only used the camera inside, and we examined some of the 48-megapixel shots of people and objects, which revealed a stunning level of detail. To create low-light photos, the Honor View 20 will use 4-into-1 pixel binning and the established Huawei-created, A.I. driven stabilization feature called Aritificial Intelligence Stabilization.

That’s right, the View 20 has a single camera lens, but it’s a very special one.

The 48-megapixel monster camera has the potential to meet the challenge already set by the Pixel 3 and the Huawei Mate 20 Pro as one of the best smartphone cameras available, and we look forward to using it in the real world.

The Kirin 980 processor and either 6GB or 8GB of RAM powers the Honor View 20, along with 128GB or 256GB of internal storage, meaning it’s essentially the same as the Huawei Mate 20 and Mate 20 Pro, complete with all the artificial intelligence features provided by the Dual NPU (Neural Processing Unit). This includes the 3D modelling feature, where you can scan in an object (like a cuddly toy), and bring it to life in augmented reality. In addition to this, the View 20 introduces three new pieces of technology: Liquid cooling, triple-antenna Wi-Fi, and dual-frequency GPS.

We’ve seen liquid cooling before, on everything from the Samsung Galaxy Note 9 to the Pocophone F1. Here, Honor calls it The Nine, a name taken from its position in the number of internal components. It’s an S-shape cooling tube that runs from the chipset to the camera, and then to the battery charging unit. What makes it different here is the use of A.I., which predicts where heat will be generated next, so it can start the cooling process before heat begins to build up. This should help overall performance.

Honor has added a third antenna to the Wi-Fi array, and it’s designed to help maintain a strong signal when the phone is being held in landscape orientation, like when gaming or streaming video. It activates dynamically, only kicking in when it sees the signal is dropping, to ensure a solid, reliable connection. It’s a similar story with the dual-frequency GPS, which uses A.I. to select the best satellites to deliver the strongest signal at the time.

The 4,000mAh battery is very welcome, and we’re hoping for two days use out of the View 20, plus it has fast charging too. The fingerprint sensor is on the back, where arguably it’s at its most convenient, despite the allure of in-display units. Finally, the software is Android 9 with Honor’s own Magic UI 2.0 over the top. At the moment, on the version we tested, this looked identical to Huawei’s EMUI 9. It’s not clear whether it will differentiate more in the future, or if this is a simple branding alteration. Honor told us it does envisage Magic UI changing over time, and becoming more youth-orientated, but we don’t know what this means, and Honor wasn’t in a position to provide details either.

The Honor View 20 we tried was at least a month away from being released globally, yet it felt mature, considered, and well-executed. It’s pleasing to hold — not to light, not too heavy — the design is eye-catching for reasons other than a simple colour change for once, and the camera shows real potential. Not only this, but the phone is different to other Honor devices, and to those from other manufacturers. That’s why we say it’s a potential turning point for Honor.

A smartphone from a company that’s beginning to spread its wings.

It has its own identity provided by the V-shape reflection on the back, the punch hole screen stands out as being visually interesting and technically beneficial, the software appears to be evolving to suit the brand’s needs, and it has a damn exciting camera on the back with very big numbers attached. For the first time, this feels like an Honor phone. Not a rebadged Huawei phone, or a slightly generic me-too device, but a smartphone from a company that’s beginning to spread its wings.

The only thing we don’t know yet is the price. In China the 8GB/256GB model costs the equivalent of $510. If the international version can come in at a rounded down $500, or 500 British pounds, it’ll be a strong contender for the OnePlus 6T. We will know more on January 22, when the device is announced internationally. Exact regions will also be confirmed, and we have no information on whether a U.S. release will be forthcoming.