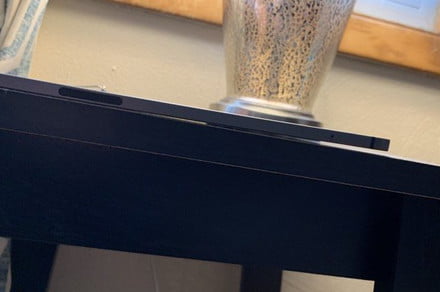 A MacRumors reader submitted this photo of a brand new iPad Pro with a noticeable bend. MacRumors

Did you open your shiny new iPad Pro to find that it was slightly bent? You’re not alone. Apple confirmed that some iPad Pros may ship with a very slight bend in the chassis — and that’s not a defect, the company says.

Alarmed by reports that some new iPad Pros may have a little roll in their stroll, as well as comments from Apple that this is not a defect and will not affect the performance of the device, some customers reached out to Apple’s Tim Cook directly to voice their concerns. And one MacRumors reader heard back, not from Cook himself but from Apple VP of hardware engineering Dan Riccio.

According to Riccio, that little bit of bend meets Apple’s quality standards just fine, thank you very much:

“Relative to the issue you referenced regarding the new iPad Pro, its unibody design meets or exceeds all of Apple’s high quality standards of design and precision manufacturing. We’ve carefully engineered it and every part of the manufacturing process is precisely measured and controlled.

Our current specification for iPad Pro flatness is up to 400 microns which is even tighter than previous generations. This 400-micron variance is less than half a millimeter (or the width of fewer than four sheets of paper at most) and this level of flatness won’t change during normal use over the lifetime of the product. Note, these slight variations do not affect the function of the device in any way.

Again, thanks for reaching out and I hope the above explanation addresses your concerns.”

The issue was first reported by The Verge, which noted that the bend is apparently the result of a cooling process used to make the iPad’s metal and plastic components in manufacturing and can show up on both the 11-inch and 12.9-inch 2018 iPad Pro models. While Apple considers the issue normal, if you don’t like the bend, you shouldn’t have any issue returning it.

The 2018 iPad Pro was announced at an unusual event in Brooklyn, rather than the California locations the company has historically chosen. And bend or no, our review of the product labels it the best tablet ever. But don’t sell your laptop just yet. After all, Apple may say its hardware is ahead of the curve — but in this case, the curve may be catching up.