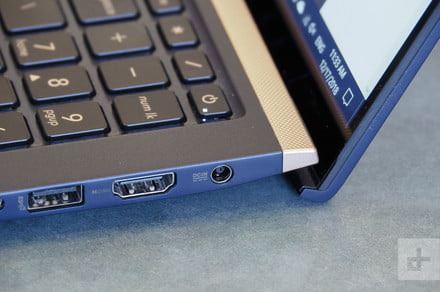 Lenovo finally released a 15-inch ThinkPad aimed at enthusiasts. The ThinkPad X1 Carbon mates some speedy components with the usual Thinkpad look and feel to make for a notebook that should please the line’s biggest fans.

Asus is leveraging a class-leading screen-to-body ration to pack a lot of notebook into a remarkably small chassis with its ZenBook 15. Is that enough to go up against an industry stalwart?

The ZenBook 15 and ThinkPad X1 Extreme are both built around large 15.6-inch displays, but Asus lined its panel with tiny bezels — 3.0mm along the side and 4.5mm up top — to fit its screen into a chassis that’s closer to 14-inch size. That makes the ZenBook 15 much smaller in width and particularly depth, and indeed the ThinkPad seems a bit large by comparison.

Both notebooks are tested against MIL-STD-810G military standards for durability and resistance to the elements, and they’re both robust notebooks. The ZenBook 15’s keyboard deck is a bit more flexible than we like, though, making the ThinkPad the more completely rigid.

Regarding aesthetics, Asus designed the ZenBook 15 with the usual Royal Blue color fitted with gold trim and sporting the iconic Asus concentric swirl on the lid. It’s a good-looking notebook that’s starkly contrasted against the ThinkPad X1 Extreme’s more conservative black color scheme. If you like the usual ThinkPad look, then you’ll prefer the Lenovo, but others might prefer the more elegant ZenBook design.

Both notebooks enjoy excellent keyboards with extensive travel and precise mechanisms, but the ThinkPad’s is a bit snappier and so more comfortable for long typing sessions. They both also offer large touchpads with Microsoft Precision touchpad support, while the Thinkpad X1 Extreme has the usual TrackPoint nubbin in the center of the keyboard for an extra input option. Neither Full HD display supports touch, but Lenovo offers a 4K touch display option.

The ZenBook 15 focuses on supporting legacy devices with it connectivity suite, including USB-A 3.1, USB-A 2.0, and USB-C 3.1 ports (without Thunderbolt 3 support), a full-size HDMI connection, and a microSD card reader. The ThinkPad X1 Extreme looks to support both the past and the future, with two USB-A 3.1 ports, two USB-C ports with 40 Gb/s Thunderbolt 3 support, an HDMI port, and a full-size SD card slot. Thanks to a dedicated network extension port, the ThinkPad X1 Extreme offers superior connectivity.

While the ZenBook 15 beats the ThinkPad X1 Extreme regarding sheer size, it’s not quite as robust, and it doesn’t offer nearly the connectivity.

Asus aimed for solid productivity performance with the ZenBook 15, equipping the latest Whiskey Lake 8th-generation Intel chip, the 15-watt quad-core Core i7-8565U.  Lenovo was looking for more performance, and so the ThinkPad X1 Extreme uses 45-watt 8th-generation Intel CPUs. We tested with the Core i7-8570H, and the Thinkpad X1 Extreme was significantly faster than the ZenBook 15. Also, while the Asus uses the Nvidia GeForce GTX 1050 Max-Q for good entry-level gaming, the ThinkPad opts for the speedier GTX 1050 Ti Max-Q.

Storage speeds were mixed. Both notebooks utilize PCIe solid-state drives (SSDs), but the Zenbook 15’s was faster in writing data while the ThinkPad X1 Extreme was faster in reading data. Neither SSDs will slow you down, though.

Displays are another area where Lenovo opted for better alternatives. While Asus opted for a single display option, a 15.6-inch Full HD IPS display, Lenovo offers both Full HD and 4K displays. Furthermore, the ThinkPad X1 Extreme with a 4K display also supports high dynamic range (HDR) for an exceptional video experience. We didn’t test the ThinkPad’s Full HD display and found the ZenBook 15’s version to be merely average. But Lenovo wins for offering 4K and HDR.

We tested the 4K HDR version of the ThinkPad X1 Extreme, and naturally, it didn’t last as long as the ZenBook 15 with its Full HD display. In fact, the Asus lasted twice as long as the Lenovo on our video looping and Basemark we benchmark tests. We suspect that the Lenovo’s 80 watt-hours of battery would drive a Full HD for more competitive results against the Asus’s 73 watt-hours.

The ZenBook 15 is smaller, thinner, and lighter, and it wins this round.

The ThinkPad X1 Extreme is a much faster machine that offers an extremely improved media experience thanks to its 4K HDR display. The ZenBook 15 just can’t quite keep up.