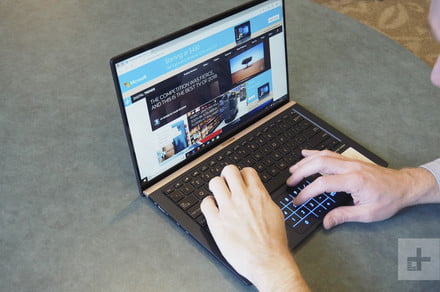 Dell kicked off the tiny-bezel trend with the XPS 13, creating a 13-inch notebook that takes up the same space as a notebook with an 11-inch display. The industry has followed along, making small bezels the most recognizable modern trait.

Now, Asus is working hard to beat Dell at its own game with a line of ZenBooks with smaller bezels than ever. The ZenBook 14 packs a 14-inch display into a chassis that rivals 13-inch notebooks in size. Does it bring enough other standout features to take on the XPS 13?

Yes, the XPS 13 is slightly smaller than the ZenBook 14, but it also has a 13.3-inch display compared to the 14-inch panel on the latter notebook. And indeed, Asus beat Dell at its own game by creating a machine with a 92 percent screen-to-body ratio versus 80.7 percent. Both are solidly built, but only Asus tests the ZenBook 14 against the MIL-STD-810G standard — that gives it a more rigid lid and chassis, although the keyboard deck is slightly more flexible than the one on the XPS 13. One notable difference is that although both Dell and Asus built in some  tiny bezels, the ZenBook 14 has its webcam up top where it belongs while the XPS 13’s webcam creates an up-the-nose video conferencing experience.

Aesthetically, the ZenBook 14 is a Royal Blue with gold trim and the iconic Asus concentric swirls on the lid, and there’s a textured gold bar above the keyboard that looks like a sound bar but is only ornamental. The XPS 13 comes in two colors, their conservative black and silver with carbon fiber keyboard deck and then an Arctic White that utilizes a unique material for an equally comfortable wrist rest. We find both notebooks to be elegant and attractive, but have to give kudos to Dell for offering a different color scheme.

Both notebooks sport keyboards with ample travel and precise mechanisms, and we can’t give a win to either regarding this input mechanism. Both touchpads are well-sized and support Microsoft’s accurate Precision touchpad protocol and so work equally well. And both notebook’s Full HD display isn’t touch-enabled — another tie. But Asus includes its NumberPad LED numeric keypad feature built into the touchpad, and it works well for anyone who needs to enter a lot of numbers.

Which notebook has better connectivity depends on a user’s specific needs. The ZenBook 14 has better legacy support with USB-A 3.1, USB-A 2.0, and USB-C 3.1 ports (without Thunderbolt 3 support), a full-size HDMI connection, and a microSD card reader. The XPS 13, however, is limited to three USB-C ports and a microSD card reader, but two of those ports support 40Gb/s Thunderbolt 3. If you want to connect legacy devices, then the ZenBook 14 lets to do so without fumbling around with dongles. But if you want to connect to an external GPU adapter, then the XPS 13 is your obvious choice.

These are equally matched notebooks when it comes to their designs. We’ll give the slightest edge to the ZenBook 14, though, thanks to its innovative NumberPad.

The ZenBook 14 is equipped with the absolute latest Whiskey Lake quad-core 8th-generation Intel Core CPUs, and our review unit came with the Core i7-8565U. The XPS 13, on the other hand, still uses the previous model 8th-gen Core processors, including the Core i7-8550U. Although the ZenBook 14 was a bit slower than we expected on the Geekbench 4 multi-core test, it was faster in single core and it also just beat out the XPS 13 in our Handbrake test that encodes a 420GB video to H.265.

Storage speeds were mixed. The ZenBook 14’s PCIe solid-state drive (SSD) was slower in reading data compared to the XPS 13’s PCIe SSD, but the Dell was slower in writing data. Both were plenty fast for the usual productivity work, however.

Overall, these are two very closely matched notebooks regarding performance. But Dell’s displays are better, and there’s a 4K option that Asus doesn’t offer.

The ZenBook 14 is just slightly wider and deeper than the XPS 13, it’s 0.63 inches thick, and it weighs 2.62 pounds. The XPS 13 is 0.46 inches at its thickest point, and it weighs 2.67 pounds. The bottom line is that neither of these notebooks weigh a whole lot and neither will take up too much space in your backpack.

We’ll need to look to battery life to differentiate these diminutive devices. There, we don’t have a direct comparison because our ZenBook 14 review unit had a Core i7 and a Full HD display, while we reviewed the XPS 13 in two versions, a Core i5 with a Full HD display and a Core i7 with a 4K display. But our conclusions are still the same: the Full HD XPS 13 had significantly better battery life than the ZenBook 14 while the 4K XPS 13 had just slightly better battery life even with its power-hungry display.

The better longevity away from a charger gives Dell the win here.

The ZenBook 14 is a viable alternative to the XPS 13, particularly if you want to save a little money. But the better overall laptop? It’s the XPS. It offers better display options and lasts longer on a charge. That’s enough to award it the win.