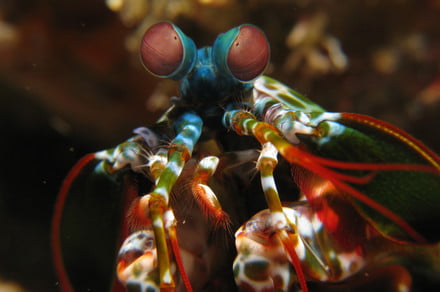 Have you ever looked into an animal’s eyes and thought, ‘I wonder how they see the world?’ We have. We do it all the time. We wonder, for example, what our cat sees as she’s stalking through the woods and how the colorful world appears to a colorblind dog. And when a cockroach scurries across the kitchen counter late at night, we wonder if it can sense the disgust in our hazy gaze.

We know we’re not the only ones that think these things. Viktor Gruev, an electrical and computer engineer at the University of Illinois at Urbana-Champaign, shares our intrigue — albeit, from a more technical standpoint.

Gruev and his colleagues recently developed a camera prototype inspired by the mantis shrimp, which have one of the most complex visual systems in the animal kingdom. By mimicking the marine crustacean’s vision, the researchers were able to make significant improvement on today’s commercial cameras and may help mitigate accidents by letting self-driving vehicles see more clearly.

“We have demonstrated a new camera prototype inspired by the visual system of the mantis shrimp, which has enabled us to capture polarization information under high dynamic range,” Gruev told Digital Trends. “This is important because polarization of light is a fundamental property of light that we [as humans] are blind to. It provides key information about the imaged environment, such as material properties of the objects and their geometric shape. It is also useful to capture this information when driving through hazy or foggy conditions, where polarization information can improve detection visibility of objects on the road.”

As for dynamic range, this is a measurement of the brightest and darkest regions that a camera can capture in a given instant. Imagine driving through a dark tunnel and exiting into a bright and sunny day. For a few seconds, that sunlight is practically blinding. An increased dynamic range allows cameras to adjust to that transition more smoothly.

Inspired by recent self-driving car crashes, Gruev decided to address the problem of pedestrian detection through biomimicry. He and his team adopted traits from the mantis shrimp, which are capable of seeing bright and dark images simultaneously.

“There are two innovations in this work,” Gruev said. “The pixel and nanomaterials that we use for polarization sensing. The pixel is novel because it operates very differently than regular cameras, which enables a logarithmic response to the light intensity. This change enabled us to extend the dynamic range of the camera from around 60 dB, which is typical for regular cameras, to around 140 dB. … Then we added aluminum nanowires on each pixel in the imager to be able to sense polarization properties of light.”

Gruev envisions his camera being used to support self-driving cars and underwater GPS. He said they’re currently working with car manufacturers to commercialize the technology.

A paper detailing the research was recently published in the journal Optica.