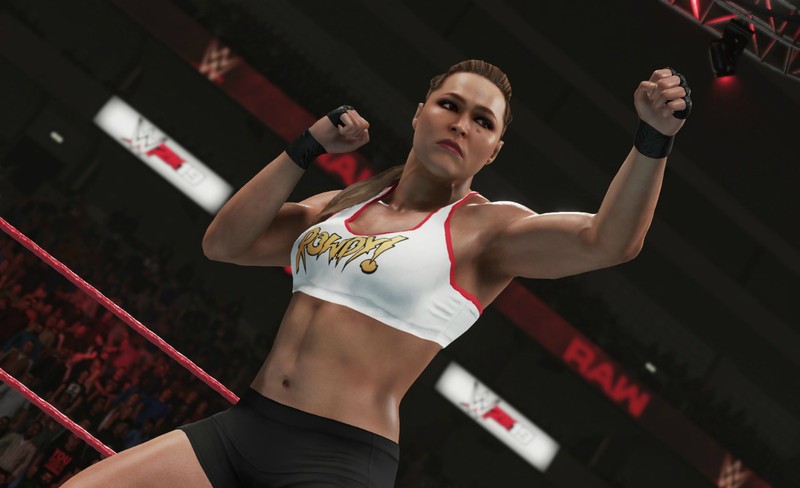 WWE 2K19 is out, and as such with annual sports (or sports entertainment) titles, it can be difficult to figure out all that the new releases have to offer. Let us take that difficulty out of the equation.

We’ve gone through this game with a fine-toothed comb to find absolutely everything new. Here’s what you can find new compared to WWE 2K19. The first thing you’ll notice upon booting this game up is its beauty. WWE games have looked great over the years, but WWE 2K19 takes it to a whole new level.

Strobe lights accurately bounce off everything in the arena, your superstar included. The multi-colored display lights shoot colorful beams of energy into the sky.

The flashes from the floodlights are blinding, and the spotlight follows superstars with methodical and smooth motion. This is one beautiful game, and believe it or not, much of the improvements come from sheer lighting.

WWE 2K19 seems to be a year focused on tightening up the solid foundation established in the previous year’s game, and you won’t see a better example of that than with changes to several popular match types.

The classic steel cage match is back, and it’s more dangerous than ever with new environmental fighting possibilities. For starters, you can now fight your opponent as both of you are climbing the cage. You can also pick your opponent up and throw them into the side of the cage. The fighting can go all the way to the top before you make one last effort to reach the other side.

Speaking of which, there’s now a button mashing mini-game to escape the cage either over the top or through the door. It’s a simple addition, but it adds another layer of difficulty in a match that was a bit too easy to win before.

Hell in a Cell

This gruesome match type is perhaps the most iconic for WWE. Hell in a Cell has shrunken in total size this year, but the change is much-welcomed when you consider the new possibilities.

It’s now much easier to break outside the cell, and not just from one side. You can break through all sides of the cell now, which — as you may guess — means you can also fight on all four sides of the cell outside.

The match has been propped up with a host of new animations for cell-fighting, making the match feel more impactful throughout all stages.

When you decide to climb to the top, you’ll find that lateral movement is now possible mid-climb. Superstars can fight each other before reaching the top. And once on top, you’ll now have four cell panels to break instead of just two.

The cost of all this is the inability to grab weapons from beneath the ring. That’s sure to be a big downer for some, but if it makes for a more meaty match in all other areas, then it’s a welcome tradeoff.

Showcase mode is back For some inexplicable reason, 2K removed Showcase mode from last year’s game. This mode places a spotlight on prominent moments in WWE history.

Well, it’s back in WWE 2K19, and this time we get a great retelling of Daniel Bryan’s rise to fame in the WWE. From his early days as a tryout talent through to the YES! Movement and on his way to the WWE Championship, you’ll get to relive all of his biggest moments.

Showcase mode includes digital renditions of promos and matches, with the real commentary from these moments used to heighten the authenticity. You’ll also hear from Daniel Bryan himself as he chronicles his musings documentary style.

MyPlayer is back as the most personal mode in a WWE video game. You’ll create your character and see which new heights you can take him to. Here’s everything that’s new.

MyCareer is back to offer an original story. While MyCareer isn’t a new feature in and of itself, WWE 2K19’s MyCareer is the first in series history to have a fully-voiced dialog.

There are close to 30 WWE superstars featured in the story, each with multiple pages worth of lines. There are also several original characters and radio personalities who will chime in on what’s going on in the world of wrestling.

While there isn’t much room for user freedom, the linearity allowed 2K to deliver a truly memorable and fun story. You’ll start out as a fledgling wrestler from an independent company and go as far as your drive can take you, hopefully to the WWE Hall of Fame someday. Character progression in WWE 2K19 is a bit different. You now earn MyPlayer Skill Points which can be used to purchase upgrades on a massive skill tree.

Each node of the skill tree corresponds to a few points of stats for any of your attributes, and you’ll also unlock special character abilities on the way. There are maximum stats for each category, and some of these categories can go much further once you settle in on your preferred fighting style.

And yes, VC is still in the game, but it’s not used for character progression outside of purchasing new moves, superstar parts, and theatrics (all of which can still be unlocked through loot crates, by the way).

2K Towers and Road to Glory New to MyPlayer this year is 2K Towers. This mode lets you take your superstar into a series of matches gauntlet-style, with the match types, participants, and victory conditions adhering to a set of fun stipulations.

For instance, one Towers session might have you facing a series of opponents who have all won the Royal Rumble. There are both daily and weekly events to partake in, and you’ll earn increased rewards in this mode.

Of course, Road to Glory is back to offer a standard ranked ladder for those who are ultra competitive. 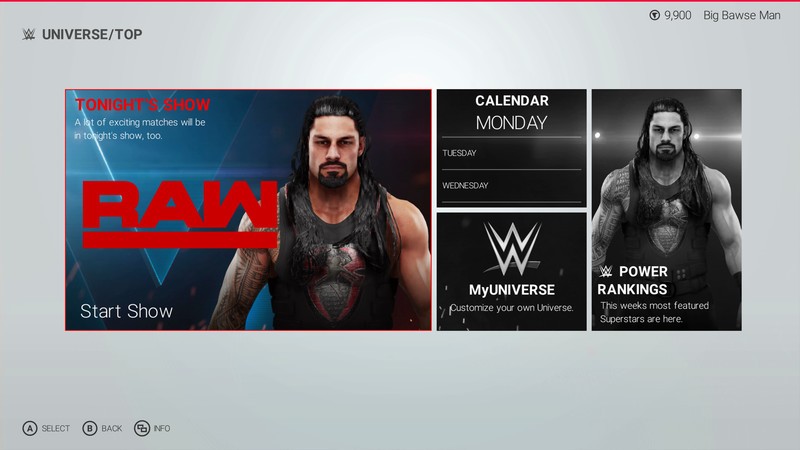 Veterans to the series know that Universe Mode can do with some big improvements. While we wouldn’t necessarily call the changes made to the mode in WWE 2K19 “meaty,” there are several quality-of-life changes that shouldn’t go unappreciated.

For one, show management and customization have gotten a lot better. Matches with rivalry cutscenes can now be edited in a way that lets you retain the rivalry status. You can also now choose the outcome of matches you decide to simulate. The ability to assign a manager to any superstar you want is also welcome, and the fact that Universe finally properly includes those managers in matches and rivalry cutscenes is exciting.

2K also hooked us up with a match tables editor. This feature essentially allows you to customize how often certain match types appear on your shows. The tool, along with the aforementioned improvements, should go a long way toward improving AI-based booking. Moving on, each show can now have up to 6 titles, mixed and match however you’d like. You could have an entire Divas-only show with Divas-only championships if you so wish. And the Money in the Bank briefcase now also counts as a title. Speaking of Money in the Bank, it’s now possible to create your own briefcase with custom logos, colors, and materials. 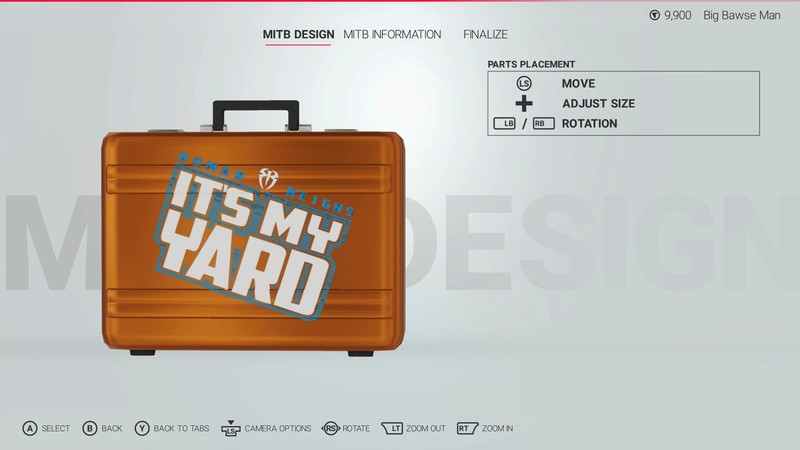 And speaking of championships, you now organize the pecking order of your WWE Universe rosters by championship so that you can ensure certain superstars only fight for certain titles. This seems to affect how Universe mode automatically books shows, so random weird occurrences like Undertaker vs Aiden English in a Falls Count Anywhere match should no longer happen (unless, of course, you want it to). This is a fun one. Your matches can now be played with Big Head Mode enabled. It’s just as you’re imagining: wrestlers go at it with huge heads on their normal now-tiny bodies.

It’s sillier than we’re used to in WWE games of late and can be ignored if you’d like, but those who come to love it will enjoy oversized versions of their favorite superstars where all the hurt and pain in the world can be seen on their faces without having to squint.

WWE 2K19 has the biggest roster to date, with over 200 superstars from the past and present being featured. Indie darlings turned champion like AJ Styles and Samoa Joe. Legends like Ric Flair and The Rock. Electrifying acts like The New Day and the Hardy Boyz. Fierce women like Ronda Rousey and Charlotte Flair. This roster is packed, and you can add to it even more by downloading custom superstars from the Creation Suite. While we’re on the topic, the Creation Mode is also getting its fair share of new bits. You can find hundreds of new parts and over 200 brand new moves to use on your created superstars.

That includes a new superstar body type: blocky. That’s right, you could create an entire Minecraft or Roblox wrestling federation if you wanted. For the less creatively inclined, a new randomizer feature generates a full-blown superstar. These aren’t jumbled messes of characters, either. The result is often something so cohesive that you’d wonder if the wrestler was in the game as a default character.

You can also do something similar for the WWE superstars included on the disc, as you can now customize the attire colors for the superstars and give them a random spin of their own.

WWE 2K19 isn’t the single biggest leap in the series’ history, but it certainly feels like the most meaningful one. The game is out today. Will you get it?