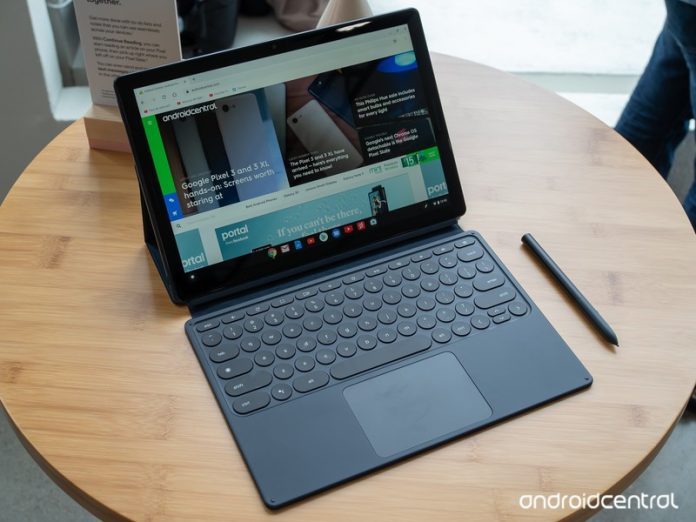 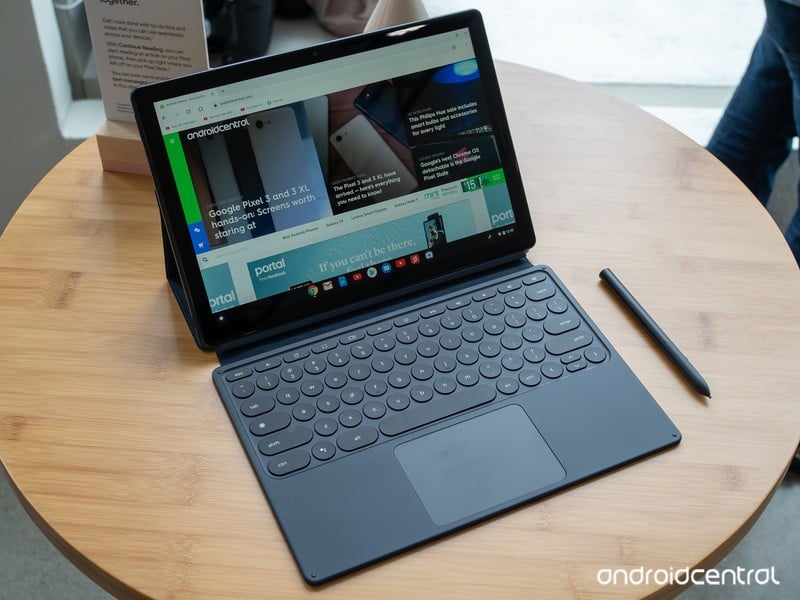 The hardware is gorgeous, but Google has something to prove in the software.

Google threw a little shade at “laptops trying to act like tablets” as it announced its latest convertible two-in-one device, the Pixel Slate. Google doesn’t want to call this new device a laptop, or a tablet (though it’s listed in the “tablets” section on the Google Store), but something new altogether — a convergent device that splits the difference, without compromising.

In reality the Pixel Slate falls right in line with other convergent devices like the Surface line: it’s a large tablet-like device that can work on its own, and is filled with enough power to replace a laptop when a full-featured keyboard is attached. And most importantly for Google, this is its first tablet detachable device running Chrome OS, with a refreshed and improved tablet interface.

Looking at the Pixel Slate as a tablet, was surprised by just how big and heavy it is. Remember this is a 12.3-inch device, which is much larger than you typical tablet, and it has laptop-like specs (and a battery to support it). That display is surrounded by decent-sized bezels to promote holding it as a tablet, and also to make room for a pair of front-firing speakers. It’s surprisingly thin, just 7 mm, but that makes it feel extra dense. The 1.6 pound weight is seemingly perfectly distributed throughout the tablet, so it doesn’t feel top- or side-heavy as you hold it, but it still feels heavy regardless. For comparison the 12.9-inch iPad Pro is also roughly 1.6 pounds. I wouldn’t want to hold this up in the air for more than a handful of minutes, unless I was perhaps cradling it in my hand in portrait mode to draw with the Pixel Pen.

This is typically great Google hardware — but it’s pretty big and heavy as far as tablets go.

The rest of the Pixel Slate is rather featureless. The entire back is flat and smooth, and the edges are just rounded metal save for a couple spots used for antennas. There are two USB-C ports, both of which work for charging and data, which is great to see — but you give up the 3.5mm headphone jack, which is just a step too far for many people.

Drop the Pixel Slate into its folio keyboard case, and things get a bit more interesting. Looking at the device as more of a laptop, the 1.6 pound weight doesn’t seem all that daunting. Despite not having a battery, the keyboard itself weighs another 1.1 pounds — for a total package of 2.7 pounds, about normal for a thin-and-light laptop. This keyboard is also a massive step above your typical tablet accessory — this thing turns the Pixel Slate into a proper laptop. The keys have more travel than the Pixelbook, and it only takes a moment to get over the awkwardness of the round keys — I was typing quickly and accurately in no time at all. It’s also backlit, which you don’t often see on these removable keyboards. The trackpad felt just as smooth and responsive as my MacBook Pro, which is high praise.

The keyboard does well with its mix of materials to accentuate the experience. The exterior is a soft suede-like material that’s easy to grip and should hold up pretty well. The base has a grippy silicone-like material, similar to the base of the Google Home Mini, so it won’t slide around in laptop mode. It also makes clever use of magnets, which is something we’ve seen over Google’s hardware history. The case portion of the keyboard folds around back and attaches to the Slate with magnets at a wide range of angles, and flips back over and magnetically connects to the screen — albeit not as securely as the Pixel C did back in the day, unfortunately.

Chrome OS feels a bit more at home on a tablet than before, but it doesn’t feel as good as iOS or Android.

Google really wants Chrome OS to be capable on tablets, and the Pixel Slate is its fresh attempt. There are a few subtle changes that make it feel more at home on an all-touch Slate — like a Pie-styled quick settings panel, cleaner window management, and a new app drawer view that’s displayed by default when there’s no keyboard attached. Chrome OS still feels a little awkward without a keyboard and mouse, to be honest, and the issues with running some Android apps are well-documented at this point. Google needs devices like this out in the wild to make the experience better, though, so it’s hard to chastise it too hard at this point.

In my limited time with the device at Google’s hardware launch event in New York City, I couldn’t discern just how fast (or slow) the Pixel Slate was. We were using freshly power washed devices with dev-release software, and it wasn’t clear which spec variants were deployed in the demo area. The base model with 4GB of RAM and a Celeron processor isn’t going to blow anyone away, but you can spec up this exact device to a Core i7 and 16GB of RAM where it could compete with the best Chromebooks available today.

Then we bring it all home with the pricing: starting at $599 + $199 for the keyboard, this is not a device for everyone. And really, chances are if you expect this to be your main portable computing device, you want to bump up one level to a Core m3 processor and 8GB of RAM, which is $799 (again +$199 for a keyboard). That’s $998 for a two-in-one running Chrome OS. So that raises the question, then: is the Pixel Slate worthy of this high price when it may not be as good at tablet things as an iPad Pro, but also not as powerful for laptop duty as a Surface Pro? That conclusion will come with time. Right now, I’ll say that the hardware is great and the keyboard is smartly made — a device worthy of attention, if not your money right away.