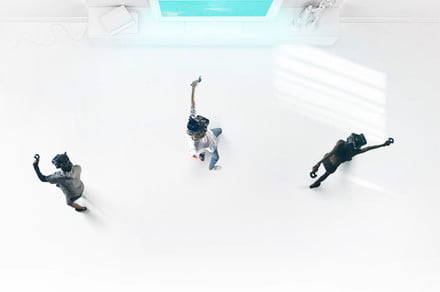 Gamers can finally break free from the tethers of virtual reality (VR) as HTC’s Vive wireless adapter officially hits store shelves today, September 25. With models available for both the HTC Vive and Vive Pro, hardcore gamers and developers alike can enjoy stepping into VR without needing to worry about tripping over wires or becoming entangled in cables. The Vive wireless adapter marks the first significant step into the future of graphically intense wireless VR for consumers, starting at $300.

Offering flexibility to its users, the Vive Wireless Adapter removes the need to have data, power, and video cables running from the headset to a Windows PC. The T-bone shaped adapter sits atop either an HTC Vive or Vive Pro, wirelessly transmitting data between the headset and a supported Windows computer with Vive’s PCIe WiGig card installed — the card itself is included in the box with the wireless adapter.

Weighing in at only 129 grams, we don’t expect the accessory to be causing any neck strain. The Vive wireless adapter’s battery is a small pack that the user attaches to their waist and can provide up to 2.5 hours of charge at a time. Don’t worry though, if you need to jump back into the game quickly the pack does support Qualcomm’s Quick Charge 3.0 technology for refueling in practically no time at all.

HTC is currently offering two version of the Vive wireless adapter, one designed for the HTC Vive and the other for the Vive Pro. Each headset uses a different interface to communicate with a PC and requires its own solution. While the Vive uses three separate HDMI, USB, and DC connectors, the Vive Pro opts to use a singular cable to get the job done. HTC Vive users can pick up their addition for $300, while HTC Pro users will need to shell out an addition $60 for their version.

Those looking to pick up the headset will be gifted a two-month Viveport subscription for no cost. Just ensure that your PC meets the minimum requirements with an Intel Core i5-4590/AMD FX 8350 CPU, Nvidia GeForce GTX 1060/AMD Radeon RX 480 GPU, 4 GB RAM, and an available PCIe slot.