Home News To infinity and beyond? Space Force may be a real thing by...
News

To infinity and beyond? Space Force may be a real thing by 2020 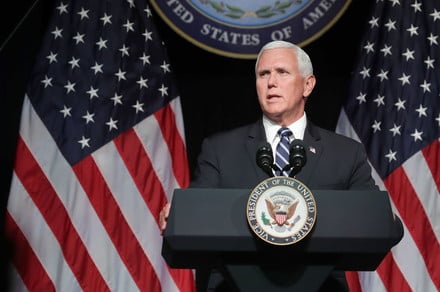 On Thursday, August 9, Americans found out that President Donald Trump is serious about the creation of a Space Force, and it will be here sooner rather than later. In a morning speech at the Pentagon, Vice President Mike Pence laid out the administration’s plans, which state the Space Force may be established as soon as 2020.

“As President Trump has said, in his words, it is not enough to merely have an American presence in space — we must have American dominance in space. And so we will,” Pence said to attendees. “Space is, in his words, a war-fighting domain just like land and air and sea.”

According to a Department of Defense report released Thursday, the Space Force would be the sixth branch of the military, tasked with protecting United States security interests in space. Its aim would be “to deter and if necessary degrade, deny, disrupt, destroy, and manipulate adversary capabilities to protect U.S. interests, assets, and way of life.”

Some of these strategies would involve the development and use of anti-satellite weapons, communications jamming technologies, and enhancements to the U.S. radar and GPS systems. The Space Force itself would be created from the reorganization of pre-existing space programs and personnel, Pence says, and is designed to respond to efforts by countries like Russia and China, who have already stepped up efforts to develop space weapons.

“As their actions make clear, our adversaries have transformed space into a war-fighting domain already, and the United States will not shrink from this challenge,” Pence argued.

The report specifies three different agencies coming under the Space Force umbrella: The Space Development Agency, the Space Operations Force, Services and Support, and the Space Command, to be led by a four-star general. Given that the creation of a new military branch requires Congressional authorization, plans are to formally request the establishment within the 2020 budget.

Given the timing, it seems fairly likely that Trump plans to make his Space Force plans a significant part of his 2020 re-election campaign.

When Trump alluded to his idea for a new American branch of the military in space, the idea was met with a combination of excitement, dread, and derision. Pro-military analysts lauded it as a way to protect our increasing dependence on technology, much of which is served from satellites in space. But others have criticized the plan as wasteful.

That’s what former NASA astronaut Capt. Mark Kelly did on Thursday, telling MSNBC that “it doesn’t make sense to build a whole other level of bureaucracy in an incredibly bureaucratic DoD,” pointing out that the Air Force Space Command already is doing much of the Space Force’s work already.


Facebook
Twitter
Pinterest
WhatsApp
Previous articleSamsung Gear owners may want to wait before upgrading to Android 9.0 Pie
Next articleThis Saturday, a NASA probe will brave the heat to try and ‘touch’ the sun