Scientists pinpoint exoplanets where life could bloom like here on Earth 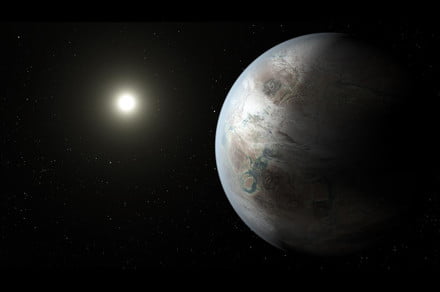 A few decades ago, the search for extraterrestrial life was a fringe science. (Remember Jodie Foster’s eccentric and ostracized character in Contact?) Today, it’s captured the interest and imagination of astronomers and laymen alike.

If and when we do discover alien life, there is a good chance it will have taken hold on an exoplanet — that is, a planet outside our own solar system. With improved instruments, scientists have made some tantalizing discoveries over the past year, identifying a handful of exoplanets that may harbor life, and instigating speculation about where to look.

Now, new research from the University of Cambridge and the Medical Research Council Laboratory of Molecular Biology suggests that the likelihood that life will develop on an Earth-like planet is closely tied to the light given off by its host star. This might not seem like a revelation — we all know life on Earth depends on the sun — but the researchers say the finding help pin down candidate planets while weeding out those less likely to harbor life.

“This work allows us to narrow down the best places to search for life,” Paul Rimmer, a postdoctoral researcher at Cambridge and the MRC LMB, and the paper’s first author, said in a statement. “It brings us just a little bit closer to addressing the question of whether we are alone in the universe.”

In their study, Rimmer and his team state that stars that emit sufficient levels of ultraviolet (UV) light could be used as the spark to kickstart a series of chemical reactions to produce the building blocks of life as we know it.

In a paper published this week in the journal Science Advances, the researchers identified a handful of planets where the host star’s UV light could fuel this process. Each lie within the “habitable zone,” a specific range of orbit that allows liquid water to exist on the planet’s surface.

Building on the work of John Sutherland, a chemist and study co-author, who hypothesized that cyanide was an important first ingredient for the building blocks of life, Rimmer and the rest of the team ran a series of lab experiments to record the rate at which life-giving compounds could form from hydrogen cyanide and hydrogen sulphide — ingredients in Earth’s “primordial soup” — when exposed to various levels of UV light.

The results showed that the experiment under UV light produced these chemical building blocks, while the one in the dark resulted in inert compounds. They then analyzed exoplanets to identify which ones orbited in the habitable zone around stars emitting sufficient UV light. Kepler 452b, long recognized as Earth-like, was among the candidate planets identified.

This isn’t to say life couldn’t exist elsewhere, however. Some 700 million trillion rocky planets are thought to exist in the observable universe and we only know the specific about how life formed on one. Still, it offers a suggested path to discovery.

“I’m not sure how contingent life is, but given that we only have one example so far, it makes sense to look for places that are most like us,” Rimmer said. “There’s an important distinction between what is necessary and what is sufficient. The building blocks are necessary, but they may not be sufficient: It’s possible you could mix them for billions of years and nothing happens. But you want to at least look at the places where the necessary things exist.”