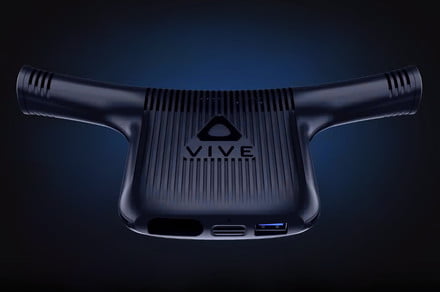 If you’re sick of tripping over the HTC Vive’s cord when you’re moving blindly across physical space, the company’s new wireless adapter is here to help. The good news is that you can eliminate that long, pesky tripwire and feel secure that you will remain on your two feet. The bad news is that the adapter will set you back an additional $300. Have the Vive Pro? You’ll need another $60 on top of that.

According to HTC, the Vive Wireless Adapter will be made available to pre-purchase on September 5 through Amazon, Best Buy, Microsoft, Newegg, and the company’s website. It won’t actually hit store shelves until September 24.

If you’re not familiar with the HTC Vive, it relies on a single 3-in-1 “combo” cable consisting of the HDMI input, the power input, and the USB output. It’s extremely long, allowing you to freely move about in your physical play space. But it has the tendency to wrap around you like a python, forcing you to untangle yourself and resume your experience.

This cable doesn’t connect to your PC, but instead to a “link box” provided in the kit. This box plugs into your wall outlet to feed power to the headset while also connecting to your PC to serve as a powered “pass thru” for the video and sound outputs, and the movement inputs.

But if you can’t break into your PC, then this adapter won’t work. It aims to replace the 3-in-1 cable and link box altogether, but in turn, you need to install an add-in PCI Express card within your desktop. That means if you’re using a beefy gaming laptop to power the HTC Vive, you’re stuck with the cable. This adapter also requires you to connect a sensor to your PC that broadcasts the wireless signal.

As for the adapter itself, it’s positioned toward the back of your head sporting antennas that resembles an annoyed Pikachu’s flattened ears. Three cables are grouped together and connect the adapter to the headset on the original HTC Vive. A single cable appears to run from the bottom of the adapter to the Vive Pro.

Another big issue here is that given you’re cutting the cord and link box out of the picture, you’re not getting a constant flow of power. That means your playtime only lasts up to 2.5 hours. The specifications list the HTC QC 3.0 PowerBank, meaning it has a quick-charge feature, but the company doesn’t state the total recharge duration. This PowerBank can charge your smartphone, so that is a plus.

“The adapter has a broadcast range of 6 meters with a 150-degree field of view from the sensor and runs in the interference-free 60Ghz band using Intel’s WiGig specification, which, combined with DisplayLink’s XR codec, means low latency and high performance with hours of battery life,” the company says in a blog.

The HTC Vive currently sells for $500 and includes the headset, two controllers, the link box, two base stations, and accessories. The Vive Pro provides a higher-quality experience for $800.