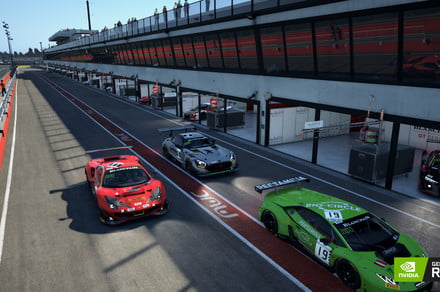 Nvidia’s GeForce RTX 2000-series graphics cards may be mighty powerful in their own right, but they are squarely aimed at delivering a feature long desired by developers and gamers alike: Real-time ray tracing. The lighting technique is the closest approximation we have for modeling the way light behaves in the real world, and it looks beautiful. But which games support it? The list isn’t long but it’s going to keep growing.

Here are all of the upcoming games that support Nvidia’s new RTX-driven ray tracing technology.

The 2014 release of Assetto Corsa has always been a beautiful game, but developer Kunos Simulazioni is looking to take Assetto Corsa Competizione visuals to a new level with the introduction of ray tracing technology. The game will launch as soon as September 12, so will be one of the first games to be able to take advantage of the RT cores inside Nvidia’s new 2000-series GPUs.

Atomic Heart is described as an “alt universe” shooter set at the height of the Soviet Union but with a rather different interpretation of how the world might have turned out. While its universe might be strange and hard to pin down though, its graphics technology won’t be. It’s beautiful, and ray tracing will only enhance that. Atomic Heart is expected to release sometime in 2019.

Arguably the most established series to adopt the new ray tracing technology, Battlefield V was showcased right alongside Nvidia’s new cards at Gamescom with reflections of explosions in everything from car doors to eyeballs. It’s slated for release on October 11.

Control would be a striking game with or without ray tracing, but its lighting and reflections look hauntingly otherworldly in the Nvidia RTX demonstration. The third-person action-adventure title will have a number of PC-only graphical improvements. Look out for more from Control in 2019.

Enlisted is a World War II squad shooter MMO that looks to recreate some of the most expansive battles of the war. You may not have time to take in all of the pretty ray tracing effects, but when it debuts in late 2018 you’ll get your chance.

Justice is Chinese developer NetEase’s attempt at a WoW-killer with a martial arts flair. It might not get the most traction in the west, but the already pretty game should look even better with a dose of ray-traced lighting.

JX3 is an HD remake of the original JX3 from 2009. It’s another martial-arts themed MMO straight out of China, and although it’s unlikely to generate a huge player base here, it’s still one of the first to adopt the new ray tracing technology.

The next entry in the iconic Mechwarrior series, Mechwarrior V: Mercenaries will feature plenty of raw and scraped metal for ray-traced lighting to reflect off of, making it a great example of the technology’s early implementation. It’s slated for a Q1 2019 release.

The Metro series has always been at the forefront of new graphical technology and Exodus is no different. We saw a ray tracing demo using the Exodus engine earlier this year and the latest demonstration of its graphical chops is no less impressive. Metro Exodus is slated to launch on February 22, 2019.

Not much is known about ProjectDH other than its been under development at Nexon for a couple of years. Early test footage suggests it’s a little like a horseback Monster Hunter with ranged weaponry, but at this stage, it’s anyone’s guess. How it will implement ray tracing is equally nebulous.

Shadow of the Tomb Raider

Shown off on stage during the original Nvidia 2000-series unveiling, Shadow of the Tomb Raider might have run into a few frame rate issues on the show floor, but it proved a great example of just how pretty ray-traced lighting can be. Look for it to launch on September 14.

The best Chromebooks can provide a top-notch computing experience in 2020. They're perfect for students, grandparents, and anyone looking for
Read more
News

A teardown video, shared by OWC, reveals the internal changes in the new 2020 27-inch iMac.The 2020 27-inch ‌iMac‌ was
Read more