Home News YouTube Music: Everything you need to know
News 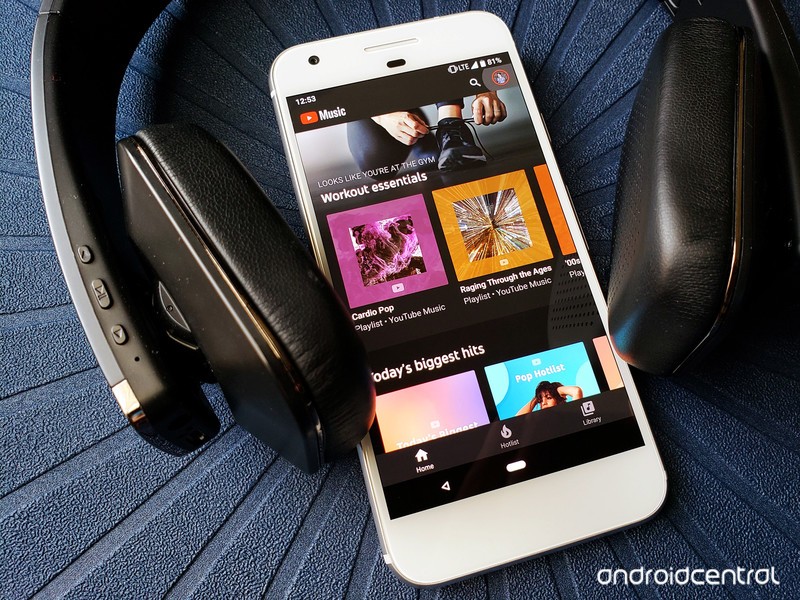 Google’s music strategy has been fractured and confusing and falling behind for years, with Google Play Music being treated like an orange-haired stepchild, YouTube Music being ignored by some users and unheard of by the rest, and YouTube being a place where people of all kinds come to listen to music — both legitimately uploaded and not-so-much.

Google’s been amassing a new team to take on the music industry, from streaming competitors like Spotify to the record labels that control what music can appear on what platforms and how.

We’ve been waiting months for the shoe to drop and Google to reveal its new strategy, and now we know what that new direction looks like. YouTube Red is dead, and it’s being replaced by YouTube Music and YouTube Premium.

May 23, 2018 — Your locally owned songs from Google Play Music will transfer over to YouTube Music

Google wants all of its Play Music subscribers to migrate over to YouTube Music at some point in 2019, and to help make that process as seamless as possible, the company’s confirmed that some of Play Music’s best features will be coming to the new YouTube Music — the biggest of which is a music locker for storing copies of song you locally own.

This news was recently confirmed by Google to The Verge, with the Head of YouTube Music saying on Twitter that “Your collection, playlists and preferences from Google Play Music will be preserved at migrated to YouTube music for a soft landing.”

In addition to having a place to store music you already own, YouTube Music will eventually allow you to buy new songs that you can add to your collection.

Just like we expected, YouTube Music’s new app and desktop site officially started rolling out on May 22. Google says the new look is currently in “early access” and is gradually becoming available for folks in the U.S., Mexico, Australia, New Zealand, and South Korea.

To access YouTube Music, you can download the app from the Play Store or hit up the desktop site at music.youtube.com. If you’re not seeing the changes quite yet, be sure to check back frequently to know when you’ve been graced with Google’s good wishes.

Similar to every other streaming service, the new YouTube Music will offer a paid subscription of $9.99/month. For that price, you’ll get an ad-free experience when listening to your tunes, can have music videos play in the background, and download songs for offline listening.

The big difference with Google’s new plan, however, is that all of the non-music features included with YouTube Red will now cost extra. 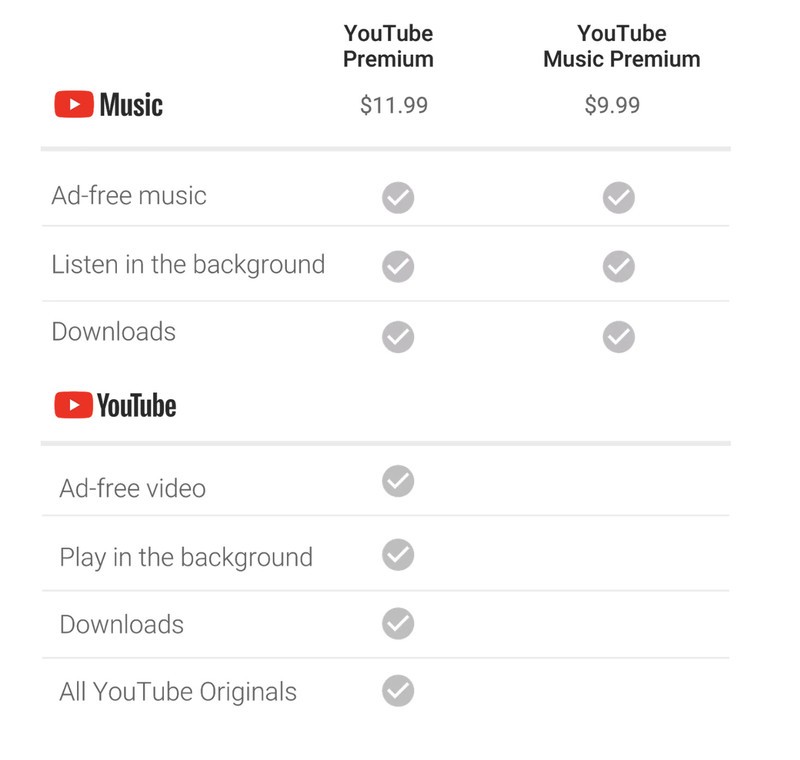 For $11.99/month, you can subscribe to YouTube Premium and get all of the above features in addition to ad-free videos, the ability to play videos in the background and download them for offline viewing, and access to the growing collection of YouTube Original programming.

Existing YouTube Red subscribers are grandfathered into the old plan

Having to pay more for the same features is never an exciting proposition, but Google’s made sure to cater to those that are already subscribed to YouTube Red/Google Play Music.

If you’ve been a paying member for some time or sign up for the current service before the new YouTube Music + YouTube Premium changes take hold, you’ll be able to get all of the YouTube Premium perks for just $9.99/month instead of $11.99.

All-new apps are coming to mobile and desktop

If you’re already using YouTube Music, you’ll notice some big changes coming to the user interface. A “reimagined mobile app” is in the works, as is a brand-new desktop site. According to The Verge, both of these have been “designed specifically for music.”

Similar to what’s already offered in Play Music, Google will use AI to recommend songs and playlists based on where you’re at and what you’re doing. If YouTube Music detects you’re at the gym, it’ll suggest music to listen to that’ll help keep you moving. If it’s late at night and you’re home, you might be offered calm songs for unwinding.

There will be a bigger focus on YouTube Originals

YouTube Originals have paled in comparison to programming made by the likes of Hulu and Netflix, but this is another area Google’s hoping to improve. 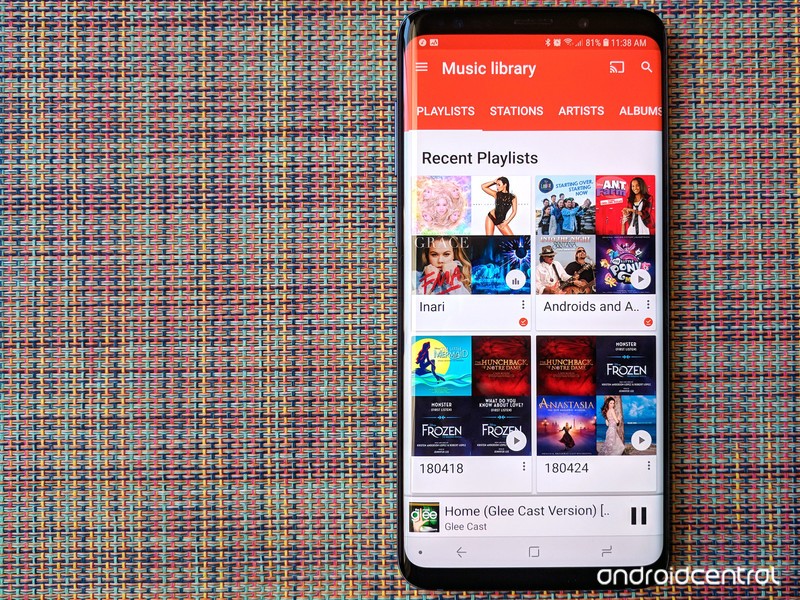 All of this is great, but what in the world is happening to Google Play Music? YouTube’s announcement says “if you use Google Play Music, nothing will change — you’ll still be able to access all of your purchased music, uploads and playlists in Google Play Music just like always.” However, I wouldn’t expect things to stay that way forever.

Google clearly wants YouTube Music to be the face that takes on Spotify and Apple Music, and having another service lying around that offers so many overlapping features will only create for continued confusion.

Play Music needs to be laid to rest in order for Google’s efforts with YouTube Music to truly pay off, and while that may not happen soon, I wouldn’t expect Play Music to still be kicking in a year’s time.

A mixtape full of promise 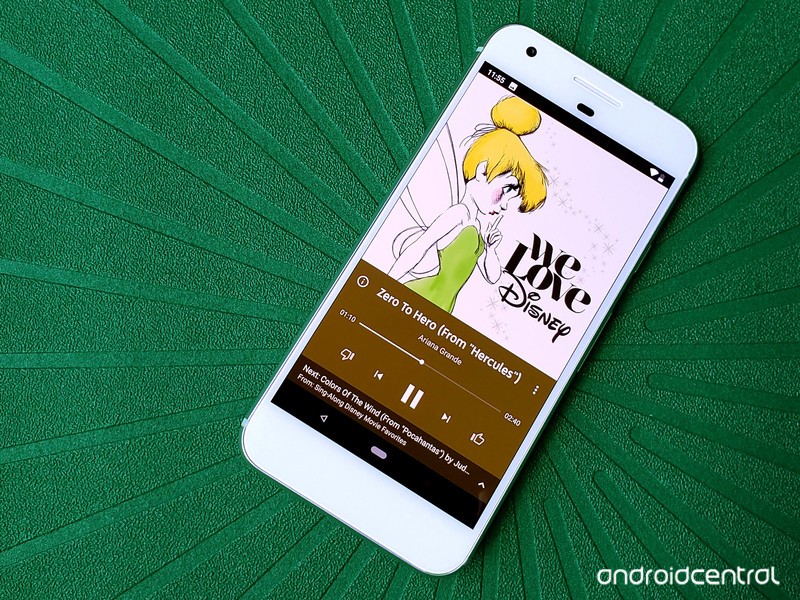 YouTube Music is built on a gold mine. YouTube is not only the most used video platform in the world, it might be the biggest catalog of professional, semi-professional, and amateur music available in the world. This isn’t the first time Google has tried to capitalize on this, but this time is different. They have gotten their act together and made us all a mixtape full of promises. 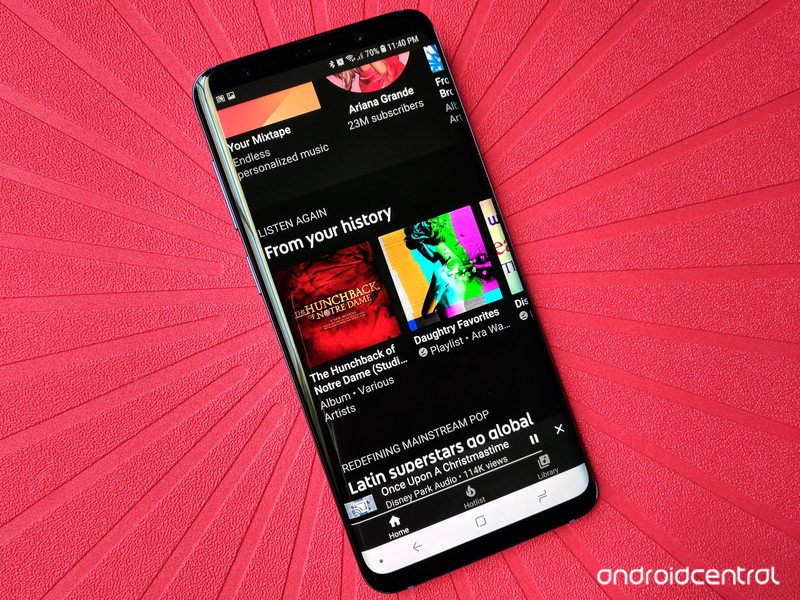 YouTube Music is an adjustment from traditional music services — especially because it is based around video rather than audio — but thanks to the Google’s search prowess and downright uncanny predictions and recommendations, getting used to Google’s newest music service should be as painless as possible. And since it’s built around years of your YouTube history, YouTube Music already knows you better than you think. 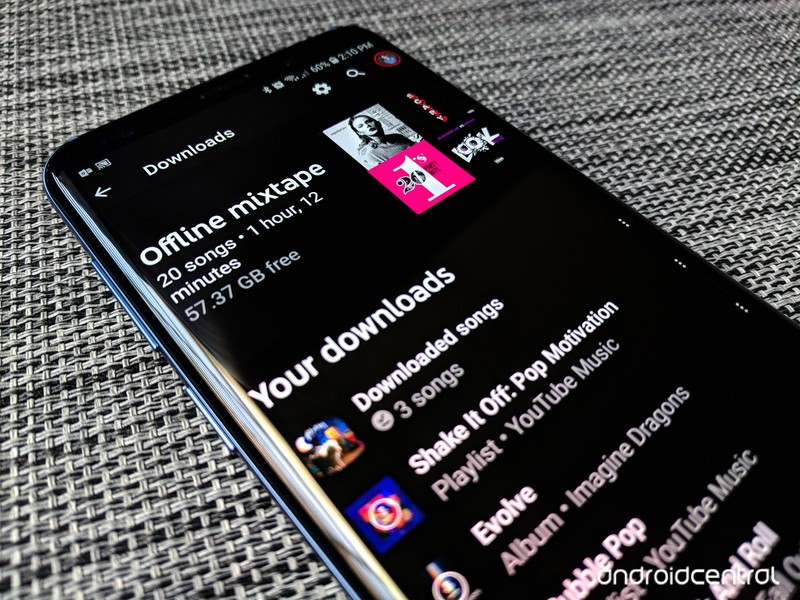 Networks fail. Your plane says it’s going to have Wi-Fi, but nope. You get stuck in the car with your parents in the middle of nowhere, and you’re outside cell range, and the radio stations are nothing but static and muffled AM country. Having music to listen to when you offline is important, and when the music service you’re using is based around video — which eats data like nobody’s business — how you save your music for offline playback is even more important.

Making the most of things 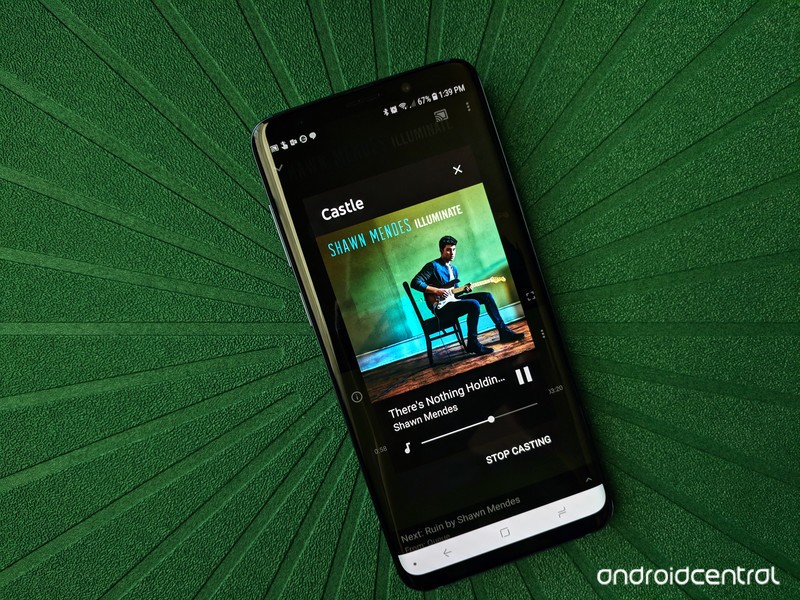 YouTube Music is “Early Access” right now, which means the service is essentially a beta and it is definitely buggy. While time and updates will fix some of those bugs, there are some things you can do to make the most of its current state.

Can it dethrone Spotify? 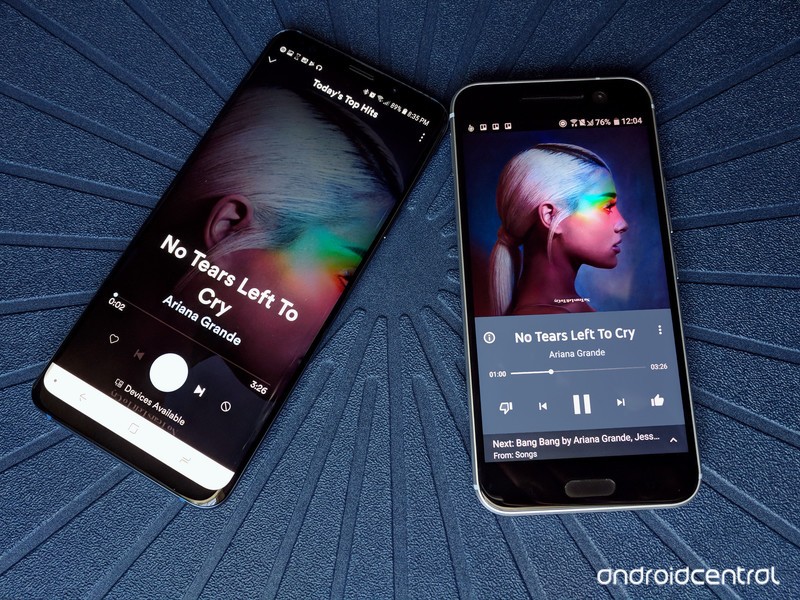 Spotify has spent the last decade building up a loyal user base, building algorithms that few companies can even begin to touch, and building up a reputation as the best brand in streaming music. YouTube, however, is one of the most used sites on the internet, period, a selection you can’t find anywhere else — a selection that will be absolutely unbeatable in the future — and Google is bringing its best algorithmic game with YouTube Music.

Don’t overpay for it 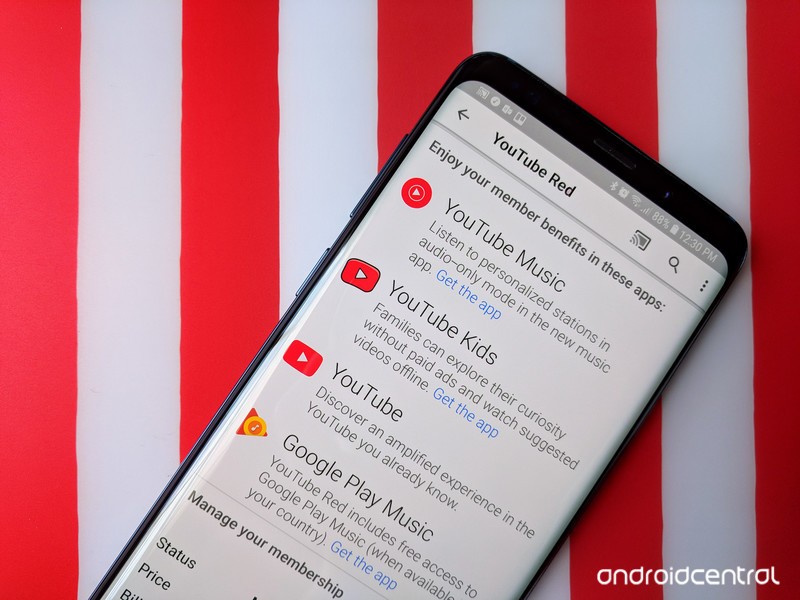 There’s no real sugar-coating it: using YouTube Music as a free user on Android is crap. There are ads every 3-6 songs and you can’t leave the now playing screen, so it hogs your screen and your battery. YouTube Music is worlds better when you unlock its paid features. YouTube Premium is absolutely worth paying for.

For the love of Duarte, don’t buy YouTube Music Premium