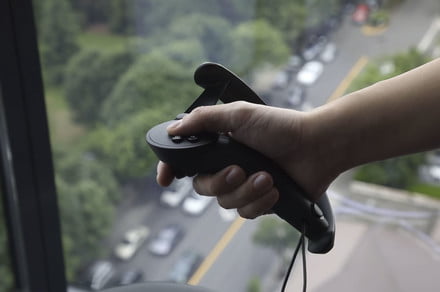 Valve’s prototype controllers for future interaction in virtual reality have a much more nuanced and varied approach to VR inputs thanks to some neat design choices. Alongside finger tracking and trackable squeezing, the thumbstick allows for intuitive navigation options. To help test out these new features, Valve has rolled out a new tech demo called Moondust to its developer base, giving them a chance to try out these new input options themselves.

Although Oculus’ Touch controllers came out a few months later than the original HTC Vive controllers, they offered a few unique features which suggested that the extra development time was worth it. While the Vive controllers still don’t support some of those features, Valve’s “Knuckle” controller design appears to be an attempt to change that. Although not officially affiliated with HTC, the controllers could well end up as an optional upgrade for owners of the Vive and Vive Pro headsets in the future.

The new knuckle design features better ergonomics, a new layout of buttons — including a thumbstick — and a strap system that allows the users to let go of the controller while keeping it within reach. They also have new sensors which add support for SteamVR tracking 2.0 and enable finger tracking and the ability to squeeze and grip virtual items, as per UploadVR. Battery life is said to be improved, too, with charging now handled via a USB-C connection, rather than the MicroUSB found on the standard Vive controllers.

Finger and palm tracking sensors mean that developers will be able to detect the entire range of hand positions, from a tightly closed fist to an entirely open palm. That is designed to enable much more nuanced interactions with objects in virtual reality, letting users squeeze things, pick them up gently to avoid ‘breaking them, or even throw them by physically letting go of the controller at the opportune moment.

To help test out these new abilities, Valve has shipped out a tech demo called Moondust to knuckle controller developers. Set in the Portal universe, players are tasked with spearheading a new initiative to manufacturer increased supplies of “conversion gel” using all of the new interactive potential of the knuckle controllers.

Valve remains tight-lipped on when the general public will be able to buy the new controllers, but as designs are solidified, we should be getting closer to a general release.