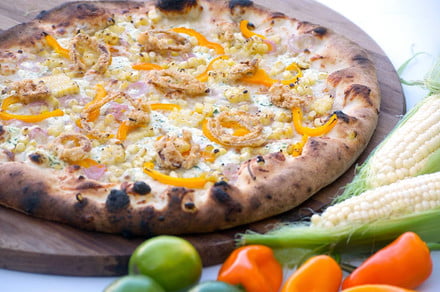 Even the food in Silicon Valley is getting high tech. No, we’re not talking about meal-replacement shakes or coffee with butter in it — we’re talking good, old-fashioned pizza. Well, not exactly old-fashioned — the pies from Zume Pizza are made by robots. To help it reach new heights, the company is upgrading its existing robots by adding arms into the mix.

It is the latest in a new trend within the food industry  — and a number of industries globally —  to increasingly depend upon machines rather than human labor. In this case, robots are not just taking your order or clearing your tables — they are the chef, too.

In order to help these machine chefs better do their jobs, Zume is giving them ABB robotic arms, which are capable of pulling pizzas from 800-degree ovens, and placing them on shelves. So efficient are these appendages that they can fill a whole rack in just 4.5 minutes.

“We’re going to eliminate boring, repetitive, dangerous jobs, and we’re going to free up people to do things that are higher value,” co-founder Alex Garden, a former Microsoft manager and president of mobile game maker Zynga Studios, told the Associated Press in 2016. Seeing that a stat from Cintas claims that restaurants jobs are responsible for up to 33 percent of occupational burns, Zume really could be saving humans several trips to the hospital.

Already, Zume’s robots are taking care of spreading sauce on pizza dough when it comes down a conveyor belt and sliding the raw masterpieces into a hot oven. While humans are still dealing with prepping the dough and ensuring the right amount of cheese and toppings make it onto every pie, robots will soon be in charge of that aspect as well.

“We automate those repetitive tasks so that we can spend more money on higher quality ingredients,” said Julia Collins, Zume’s CEO and co-founder. “There will always be a model here at Zume where robots and humans work together to create delicious food.” So don’t worry — robots won’t be kicking you out of the restaurant industry altogether, yet.

That said, robots seem to be taking the place of humans at an increasingly alarming rate. Wal-Mart cut 7,000 jobs due to automation and both hardware manufacturer and fast-food chain Wendy’s made similar changes to their workforce. The restaurant industry has not always had luck replacing people with machine parts — in fact, a Chinese restaurant chain had to shut down a couple locations due to poor service from its robotic waitstaff.

But who knows — maybe machines will have better luck with Italian cuisine.

Updated on June 21: Zume adds a robotic arm to help with its automated pizza-making process.