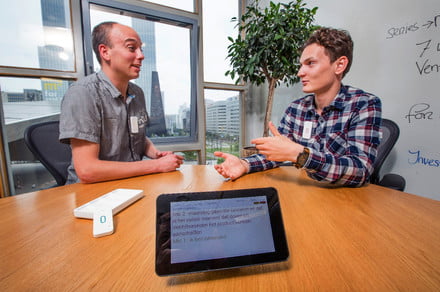 In case you hadn’t noticed, we love gadgets here at Digital Trends. But, as much as we like them, gadgets can often fall under the “nice to have” banner, as opposed to being things which fundamentally transform our lives on a regular basis. The same isn’t true when it comes to accessibility devices, aimed at helping people with disabilities carry out the kind of day-to-day tasks many of us take for granted. That is why we’re excited about a new crowdfunding campaign created by a team of Netherlands-based entrepreneurs. Called SpeakSee, it’s a multi-mic system which will accurately transcribe conversations for deaf users, rendering everyday chat between groups of people as a multi-person script.

“Both of my parents have severe hearing loss since birth,” Jari Hazelebach, co-founder and CEO, told Digital Trends. “Throughout my life, I’ve seen the communication barriers that they had to face. My father has difficulties following meetings at work, and misses out on a lot of relevant information he needs to do his job. Enabling him and millions of others around the world to be a full part of conversations again is what inspired my co-founder Marcel van der Ven, Joshua Flowers and I to create SpeakSee.”

Using SpeakSee is as easy as handing out wearables microphones for people to clip on to their clothing. After this, their words are transcribed in different colors for deaf or hard of hearing users, who can read along using a connected smartphone or tablet. However, it could also be useful for other people, such as journalists who want to transcribe conversations more easily. With that in mind, text transcripts of conversations can be easily saved and then searched using keywords.

The smart technology making this all possible takes advantage of the recent artificial intelligence neural network-assisted advances in speech recognition. It is also aided by some neat microphones, which use beamforming technology to isolate specific people’s speech and filter out any background noise. An array of built-in sensors even adjusts the microphones according to different conversational dynamics.

As ever, we offer our usual warnings about the risks of pledging money for crowdfunding campaigns. If you’re aware of these and still wish to get involved, though, you can head over to the project’s Indiegogo page and pledge your financial support. A set of three microphones and a dock starts at $349, while a pricier option gives you the chance to get six mics and two docks at a discount. Shipping is set to take place in February 2019.