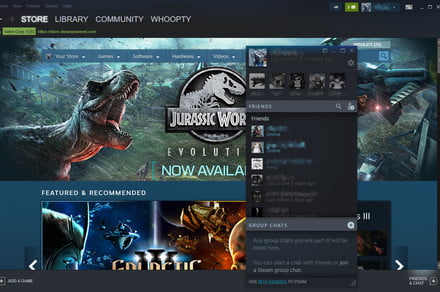 The latest beta release of Steam has a brand-new chat system in place and it modernizes the communication side of Steam as never before. Clearly inspired by some of its contemporaries in the gaming messenger space, the new Steam chat system adds group chats, overhauls friends lists, adds support for videos and GIFs, as well as encrypting its new and improved voice chat system.

Although Steam has had text and voice chat functions for years, as other services have grown and evolved, its feature set, look, and feel have begun to feel quite antiquated. That’s all set to change with the “all-new Steam Chat,” which is not only prettier to look at, but more intuitive to use, and comes with a host of competitive features.

Describing its new chat experience as far “richer,” Valve has introduced new support for pictures, videos, GIFs, tweets, and more within its text chat windows. Users can build up group chats (for gaming or trading) and invite people to them with a quick link. That group can then be saved for later, so every time you login you can connect with whichever friends of yours are online at the time.

When you want to take things further, you can open up the new voice chat system. It’s been rebuilt to be secure and private, with a WebRTC-based backend and encryption, with all voice traffic going through Steam servers, so everyone’s IP address is hidden from one another. Valve also promises much crisper and cleaner audio than before and the ability to quickly launch voice chats from within its new chat groups.

If you’d like to get in touch with friends the slightly more old-fashioned way, you can always tap on them in your friends list. That too has been overhauled though, adding drag-and-drop functionality for easy organizing, a new favorites bar to keep your best pals close at hand, and new information about each player. They’re now automatically grouped by the games they’re playing, and also give you an insight into where in the game they are; No longer do you need to wonder whether your friends are engrossed in single player action, or waiting for you to join them in the next multiplayer match.

If much of this seems familiar, it’s because other chat services like Discord have offered similar features for a while. With this big overhaul though, Steam does at least bring itself some parity with the competition and make its own communication tools a viable option for its millions of gamers. Just in time for the upcoming Summer Sale, too.

If you want to try out the new chat functions yourself, sign up to the Steam beta by going into your account and clicking “Settings,” followed by “Accounts” and then choosing to opt-in to the beta.