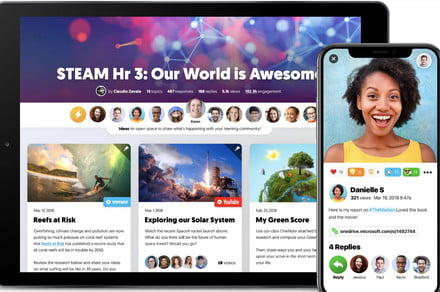 Microsoft is looking to solidify its position in our classrooms, and to that end, has recently acquired Flipgrid, the video discussion platform currently utilized by more than 20 million teachers and students across the United States and beyond. Terms of the deal were not disclosed, but the acquisition is Microsoft’s latest attempt to improve its educational offerings. Recently, Microsoft has been updating its Office 365 for Education tools, and has also updated web versions of Office to be more collaboration friendly.

Indeed, the Flipgrid deal could help Microsoft compete more directly with Google, which is already well-loved by educators thanks to its cloud-based products and Chromebooks. Flipgrid, however, really could flip the script in favor of the Redmond-based tech giant. Flipgrid allows students to create short videos in the classroom or at home in order to participate in discussions, answer questions, or otherwise interact with their peers or teachers. Already, the platform is used in 180 countries, but with the Microsoft acquisition, Flipgrid will be free to use in schools, and anyone who has already paid for a subscription will be receiving a refund.

“We’re thrilled to see the impact Flipgrid has had in social learning thus far and look forward to helping them continue to thrive as part of the Microsoft family,” said Eran Megiddo, corporate vice president at Microsoft, in a news release. “We’re diligently committed to making sure their platform and products continue to work across the Microsoft, Google, and partner ecosystems to benefit students and teachers everywhere.”

Flipgrid prior to the acquisition had maintained a longstanding relationship with Microsoft. About 18 months ago, the two companies announced a partnership that allowed for Flipgrid to integrate with a number of Microsoft products, including Teams (which allowed Flipgrid users to chat with one another) and OneNote (which allowed users to take notes).

Even as Flipgrid joins the broader Microsoft team, the company will maintain its own brand. “Flipgrid has always been about the educator community. They are the source of our innovation and impact,” said Jim Leslie, Flipgrid CEO. “Now as a part of Microsoft, we have the opportunity to scale so we can support every educator across the globe as they empower student voices.”