Intel throws down a gauntlet with its 28-core extreme CPU 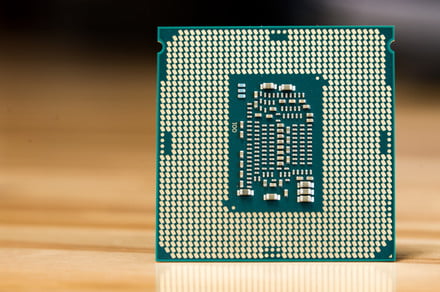 The bar for what to expect from single-socket, consumer-facing processors has been raised once again with Intel demoing a 28-core monster at this year’s Computex show. Easily capable of outstripping its existing top-of-the-line Core i9-7980XE, the CPU is slated for release later this year.

The biggest change with both Intel and AMD’s latest generations of CPUs is that they bolstered the core counts of mainstream processors. With AMD leading the charge with its Ryzen lineup, Intel followed suit and increased its Core i3 CPUs to four cores and the Core i5 and i7 chips to six cores a piece. That core-count expansion is now impacting the top of the top-end too, with Intel’s 28-core CPU likely to be the most powerful single-socket chip Intel has ever released to the public.

Beyond its core count, there isn’t much we know about this chip. We don’t know what architecture it’s built on, or what its die size is. What we do know though, is that it can run at up to 5GHz and that it makes the $2,000, 18-core i9-7980XE look weak in comparison.

In a run of Cinebench’s CPU rendering test, the new 28-core CPU was capable of a multi-threaded score of 7,334. As PCGamesN highlights, multi-CPU systems might have performed better than that in the past, but this is the most powerful single chip score we’ve seen yet. In comparison, the best current Intel CPU, the i9-7980XE only managed a score of 5,029 when overclocked to 5GHz.

Intel hasn’t made it clear when this new high-end CPU will be released but did state that it would show up before the end of the year. Its eventual price tag was also elusive, but considering it competently outpaces even chips that cost a couple of thousand dollars, we wouldn’t expect this new CPU to retail for any less.

The most intriguing part of this story could be how AMD will respond. It seemed clear that Intel boosted the core counts of its eighth-generation CPUs in response to AMD’s original Ryzen release. Threadripper proved to be perfectly capable competition — and far more affordable — than Intel’s Core i9 CPUs. With this new benchmark hardware to contend with, Threadripper 2 may do something special once again.