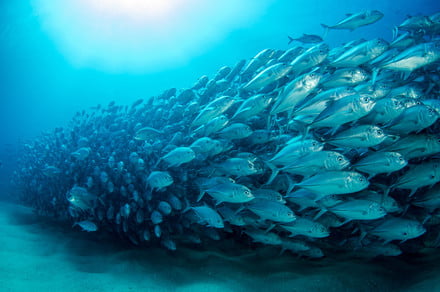 We seem to have an insatiable taste for seafood and, as a result, global fish populations are in decline. At our current rate of plunder, fish stocks could collapse by 2048, according to some estimates.

Around the world, groups like Global Fishing Watch monitor overfishing, using satellite data to track fishing vessels and minimize illegal operations. But monitoring fish stocks themselves can prove to be expensive and challenging, requiring boats to locate schools of fish with sonar and significant resources to analyze the findings.

But researchers at the University of Haifa in Israel and IMDEA Networks Institute in Spain are developing a unique system that can autonomously monitor and identify schools of fish using sight and sound. Dubbed Symbiosis, the system uses optical and acoustic technologies to detect entire schools, and could offer a noninvasive way to protect environmental interests. Symbiosis is part of the European Union’s Horizon 2020 innovation program.

“In Symbiosis, we will be able to track and monitor the fish population in sea areas in which fauna conservation is an issue,” Roee Diamant, a marine scientist at the University of Haifa, who is coordinating the project, told Digital Trends. “In an initial approach, we will concentrate on a limited subset of fish types, which may be expanded in the future. This subset includes six species for which there exist over-exploitation concerns.”

Among those species are two species of tuna, Atlantic mackerel, and swordfish — each of which is in high demand.

Unlike conventional technologies, which use sonar data that have to analyzed by personnel, Symbiosis works on its own, scanning a marine environment within a little more than a half-mile radius. The acoustic sensors are used to determine the fish’s size, speed, and movement characteristics (which helps identify the species). An optical system of cameras and artificial intelligence algorithms are then triggered to confirm the species and transmit the information to a station on the coast.

“A distinctive feature of the system is that it will be autonomous,” Diamant said. “The detection and tracking of fish species of interest will happen through acoustic instruments. This will trigger underwater cameras when the fish come within their range, and the images grabbed by the cameras will also be automatically processed in order to validate the detections.”

Moving forward the researchers plan to refine their system, improving its performance and calibrating the Symbiosis such that different systems can communicate with one another.


Facebook
Twitter
Pinterest
WhatsApp
Previous articleIf you blinked, you may have missed this year’s biggest phone innovation
Next articleThis Minion-looking robot will nag you to improve your posture as you work

It's another win for Nvidia, and another frustrating day for gamers
Read more

Amazon’s Anker charging accessory sale saves you up to 40%

Google's upcoming smart speaker and Chromecast dongle have made their way to retailers ahead of launch.What you need to knowLeaked
Read more