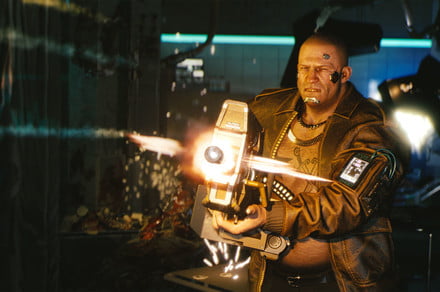 It’s safe to say that CD Projekt Red’s latest game Cyberpunk 2077 has impressed critics at E3 2018. The first-person role-playing game surprised us with its perspective, world, and combat, and we ended up awarding the game our Best in Show prize for the entire event. If you want to play the game on PC with the detail and fidelity on display at E3, however, you’re going to need a pretty powerful rig.

Also used were two 16GB G.Skill Ripjaws V Series DDR4 RAM cards, which currently go for about $400 on Amazon in a two-pack. An Asus Rog STRIX Z370-I served as the motherboard, and a Samsung 960 Pro 512GB M.2 PCIe SSD was also installed. Lastly, a Corsair SF600 PSU powered the rig, and sells for a little over $100.

These specifications are all far beyond what CD Projekt Red recommended for its 2015 game The Witcher III: Wild Hunt. That role-playing game needed only 6GB of RAM and a GTX 770 GPU with 2GB of VRAM in order to run at optimum performance.

With Cyberpunk 2077, however, CD Projekt Red is capable of running the game at much more impressive settings, and it has us wondering if the game is actually going to also release on the Xbox One and PlayStation, or if it’s secretly being developed for their successors.

Speaking to Game Informer, quest designer Patrick Mills said that his studio is still targeting Xbox One and PlayStation 4, and the game was featured at the tail-end of Microsoft’s Xbox One conference during E3.

If the next-generation consoles are just a few years away, we hope Cyberpunk 2077 also releases for them, as we would like to get an experience similar to what high-end PCs can offer. Of course, by that point, the specifications provided above will seem like nothing. It’s a never-ending chase for a perfect machine that will never exist, but perhaps the chase is more important than the finish line.