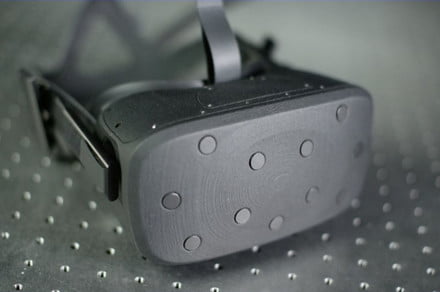 The Vive Pro certainly impressed us when we got our hands on HTC’s new top-tier VR headset, but there was one thing that a lot of people wished it had expanded upon: The field of view. Fortunately, Oculus seems to have read everyone’s minds and has been working away at that for some time now. At Facebook’s F8 event this week, Oculus showed off its new prototype, termed the “Half-Dome” headset, which takes the VR view from 110-degrees to 140.

Using the existing Oculus Rift and HTC Vive, the virtual world is displayed in front of your very eyes in gorgeous detail. But you don’t really want to look to the extreme left or right, as you’ll be staring at plastic and foam. The Vive Pro didn’t do anything to improve that. While HTC did make the virtual world more detailed with higher-resolution displays, Oculus may be the first of the two companies to develop a headset with an expanded field of view.

Where the Vive Pro comes with the same lenses as the original Vive, Oculus’ prototype adds new, larger lenses to the design. That’s what enables the wider field of view which stretches into the wearer’s peripheral vision. In our experience, this wider field of view has a bigger effect on how immersive a VR world can feel. Nothing’s worse than the goggle-like confines of a headset surrounding the user’s view. The Half Dome’s aren’t as wide as Pimax’s crazy, 200-degree VR headset, but it’s a good start.

Better yet though, those new lenses are also mechanically-controlled varifocals. Think a fancy version of your grandparents’ glasses. Much like those lenses help them see near and far, Oculus’ new design would allow for various levels of focus throughout the visual plane. If you’re looking at an object up close, the lenses would refocus there and similarly so in the distance.

Oculus suggested it would use software and hand-tracking to facilitate this, though it seems likely that some measure of eye-tracking would also be involved.

In theory, such technology could also enable performance-saving measures such as foveated rendering, which renders only the section of the screen a user is looking at in the highest detail, leaving peripheral vision to be rendered to a lesser standard. That may be why Oculus opted for mechanically manipulated lenses, rather than software-driven field of view effects. Where any forced field-of-view rendering would require additional GPU power, mechanically altered lenses would have no such impact.

Although the Half-Dome headset is very much a prototype and no real indication of what any future-generation Oculus headset will look like, it is a welcome sight from the company that kickstarted the modern VR revolution.

Now all we need is for HTC and Oculus to steal from each other so that we get a VR headset with a wider field of view and a higher-resolution display. And with a wireless module! It’s not too much to ask, is it?


Facebook
Twitter
Pinterest
WhatsApp
Previous articleA new A.I. can guess your personality type based on your eye movements
Next articleFacebook wants to make your virtual self appear as real as possible in VR