Home News Facebook’s very, very sorry, and it has absolutely no intention to change
News

Facebook’s very, very sorry, and it has absolutely no intention to change 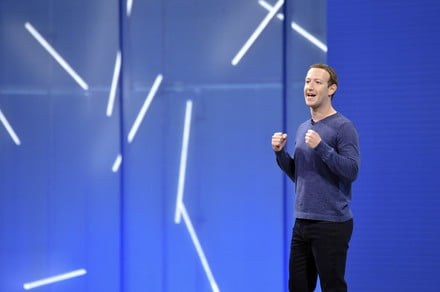 Less than a month after Mark Zuckerberg apologized to Congress for his company’s failure to prevent Cambridge Analytica from stealing and abusing private data on millions of users, he found himself once again in the spotlight. This time, though, it was a spotlight he controlled: F8, the company’s annual developer conference.

While Zuckerberg’s apology tour continued, conducting it on home turf noticeably changed the CEO’s attitude. The tense, tight, thin-lipped man we saw at Congress was replaced by a lively, optimistic character who, though still awkward, managed something akin to charm.

The tense, tight, thin-lipped man we saw at Congress was replaced by a lively, optimistic character who, though still awkward, managed something akin to charm.

It was a remarkably brash performance. Zuckerberg turned his senate appearance into a gag. In doing so, he humanized himself and his company while painting critics – including the senators who questioned him – as inconsequential. It was a good joke. It also made Facebook’s intent clear.

Build it, whether they want it or not

For a time, it seemed the keynote made us witness to the most unlikely of supernatural occurrences. It was as if Steve Ballmer, bored and frustrated by his Clippers’ lackluster performance, possessed the body of Zuckerberg and projected his consciousness into F8’s convention hall. If not that, there was at least some forced enthusiasm from the normally stilted Zuckerberg.

“We will keep building!” he bellowed, like a general rallying his troops. “This is an important moment. We need to do more to keep people safe, and we will. But we also need to keep building and bring the world closer together.” At least Zuckerberg didn’t jump around the stage.

The company did throw all of us a bone with its new Clear History function, which lets you delete your Facebook data history in a manner akin to erasing your web history in a browser. It’s a useful, appreciated feature, but not one worth much applause. Companies like Google and Microsoft both have in-depth transparency of collected data, with the option to remove it, so Facebook’s big announcement is merely an attempt to catch up with its peers.

“We need to do more to keep people safe, and we will. But we also need to keep building and bring the world closer together.”

Zuckerberg’s mockery of his senate appearance was a good joke, but it can’t compare to the bitter irony of Dating’s arrival.

Facebook’s image as bad as it has ever been. It’s struggling to retain young users and constantly alienating people already on the service with its privacy screw-ups. A recent Gallup poll found that 74 percent of people who use Facebook are “very concerned” or “somewhat concerned” about invasion of privacy. Only 11 percent said they’re “not concerned at all.”

Those are staggering numbers. The average American is more likely to believe Bigfoot exists than trust Facebook. So, yeah… why not let Facebook into your love life? What could possibly go wrong? Plenty, of course. There’s a reason why most people don’t use major social media websites for dating. Independent sites offer a degree of anonymity.

Even Tinder, which directly links to Facebook, pulls in only so much data from the social network. Zuckerberg of course promises that Dating will be oh-so-responsible with your private information, displaying only first names, but it’s not yet clear how you’ll decide what photos, information, and interests appear.

While Dating was the creepiest new tendril built by Facebook at F8, it wasn’t alone. The company’s pursuit of VR is plenty disconcerting, since it implies a desire to insert Facebook between people and their virtual experiences – which, of course, will often be social.

The average American is more likely to believe Bigfoot exists than trust Facebook.

At another point, Zuckerberg went all starry-eyed over a computer vision technology that can recreate the rooms of a home in virtual reality using only photos. Though presented as a way to revisit your childhood home, it’s not hard to think of more nefarious uses. Computer vision already lets people make fake pornography of famous actresses, or anyone else with a few hundred photos posted online. Now, Facebook is showing us how people might recreate an intimate scene on someone’s couch using nothing more than photographs.

Jeez. It’s hardly a wonder everyone at Facebook seems so happy.

Nothing to see here

It’s easy to criticize, of course, and Facebook would like you to remember that. Facebook’s constant references to positivity are more than part of corporation culture. They’re also an obvious public relations ploy meant to distraction us – and developers, who are F8’s intended audience — from the company’s problems. Facebook’s naïve optimism is that of a child elbow-deep in a bag of Oreos who, once caught, insists she only took them to share with everyone.

What would be your response to that scene? Would you thank the kid for her kindness? Would you let her go outside to ‘share’ them freely? Would you give her access to your instant messages? Am I taking this metaphor too far?

You get the point. Facebook is playing us for fools. The positive tone is meant to disguise a more sinister message. The company thinks it knows what you want better than you do, and it’s going to build what it thinks you want, whether you like it or not. I mean, what are you going to do? Leave? Hah!

Don’t be fooled. Facebook’s F8 keynote changed nothing. It’s still the same company it was before, prone to familiar mistakes, making hollow promises. Above all, it’s a company — one that makes its money by selling your personal data. Give that a moment’s thought before you sign up to make Zuckerberg your personal matchmaker.

Studios have to opt in by May 31 to have their game not removed from the service.What you need to
Read more
News