The tech behind cryptocurrency could save lives by fixing medical records 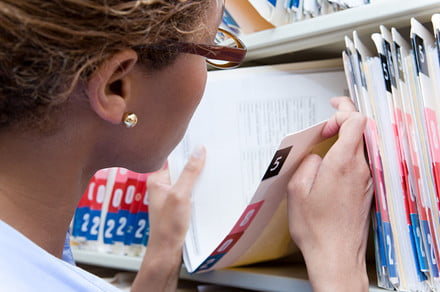 Your medical record grows longer with each visit to your doctor. Your weight, blood pressure, symptoms, and other data gradually builds up in your electronic medical records, or EMRs. It’s a neat, tidy term, but EMRs are messy. Every hospital and every doctor’s office has a different way of storing them, which means it’s not always easy for healthcare providers to obtain your medical history.

This situation, coupled with a medical emergency, can have potentially disastrous consequences. Luckily, there’s a research group at MIT that aims to bring order to the chaotic world of EMRs, with a little help from the blockchain.

Before we talk about the potential solution, let’s talk about the problem. Electronic medical records (EMRs) — also known as electronic health records (EHRs) — are the backbone of every modern healthcare system. They’re the reason your doctor is always seated in front of a computer during a general checkup. They’re filling out information about the visit, their recommendations, your condition, and adding notes. Entering data in your records during visits has, as recently deposed Secretary of Health and Human Services Tom Price stated, turned medical professionals into data entry clerks.

“A prescription refill used to take five seconds of the doctor’s time. Today, it can take 20 to 200 seconds of clicking through boxes, reviewing chart notes and entering orders, depending on the workflow and any questions that arise,” writes Dr. Paul Dechant. “Doctors and nurses spend less time talking to each other these days. Rather than calling a colleague regarding a consult, we enter the referral order. Rather than discuss the patient with the nurse, we type in our orders.”

That problem, according to a Mayo Clinic study, is a factor contributing to professional burnout. Managing records is time-intensive, and not only during patient visits. Healthcare professionals need to catalogue personal notes, procedures ordered, procedures performed, and prescriptions. Every tiny detail that exists in your medical record was put there by a healthcare professional — and not always for your benefit.

Changing doctors, providers, and facilities can all complicate your medical records.

These systems aren’t designed to streamline medical record storage and access for healthcare providers and patients. They’re primarily designed for billing. Overworked healthcare professionals end up spending hours at home or during the weekend, catching up on data entry not for your health, but for your insurance company. It’s an inefficient system. The Canadian Medical Association Journal speculates it could be less effective than old paper-based systems.

“The systems are also designed to make billing easier, not to make clinical care more efficient, so tasks such as refilling prescriptions actually take longer than before EHRs,” the CMAJ reports.

And remember, these meticulously maintained records aren’t interchangeable. Changing doctors, providers, or facilities can complicate your medical records. The city of Boston, Massachusetts has at least 26 different medical record systems currently in use. As MIT reports, of those systems has its own language for sharing, representing, and sorting data. Moving your medical records from one facility to another is complicated. They must be translated into the new system, and that can mean added strain on already overstressed medical professionals.

Added, and unnecessary. It could all be as simple as sending an email.

Here’s where the blockchain comes in. If you’re unfamiliar, blockchain forms the literal backbone of cryptocurrencies like bitcoin, Litecoin, and Ethereum. They work by keeping track of transactions in a distributed ledger, a log where hundreds, thousands, even millions of computers all hold a piece of and validate with one another. When one computer (a node) adds a piece of data (a block) to the ledger (the chain), other nearby nodes start talking to each other, distributing the updated ledger. Each block can contain different kinds of data — financial transactions, a CryptoKitty, anything, that’s why the blockchain is an intriguing option for imposing order on the chaotic world of EMRs.

Privacy is an important concern, however. As they work today, anyone can look at the bitcoin or Ethereum ledger at any time. Addresses and transactions on the ledger have no personally identifiable information in them, they don’t say your name or phone number. But they do contain the cryptocurrency “addresses” of both involved parties — the person sending the cryptocurrency, and the person receiving it. These addresses are rendered a long strings of incomprehensible letters and numbers. But if you happened to know who those addresses belonged to, you’d know who they were sending money to and when.

That’s not ideal for medical records. If someone knew how to identify your records on the blockchain, they’d know everything about your medical history. That’s why MedRec, an MIT research project, aims to use the blockchain in a slightly different way.

Instead of storing specific data in the blockchain, like every single procedure you’ve undergone, MedRec keeps stores “pointers” in the blockchain. Think of these like the hyperlinks in this article. “The raw medical record content is never stored on the blockchain, but rather kept securely in providers’ existing data storage infrastructure,” the MedRec research paper reads.

Let’s say you go in for a check-up. Your doctor enters data in his or her medical records app, and a small, anonymized piece of info goes up on the blockchain under your unique identifier. It’d be no more than a link to the internal records managed by your doctor. If you change providers, your new doctor just needs to look up your identifier in the blockchain and data, which is stored as a “pointer.” Think of it as a hyperlink to an entry in your old provider’s files. Your new doctor would enter her secure access key, and then have access to your personal ledger of medical records.

In this way, MedRec is more of an index, a high-tech, high-security card catalog your medical providers can use to look up your medical history. Since every entry is stored as a block on a chain, it’s easy for your providers to see what care you received most recently, when you took certain medications, and what medications you’re currently taking. Even if you went to an urgent care clinic in another city, state, or country, the care you received would be added to your personal MedRec ledger.

If you’re familiar with how blockchain and cryptocurrencies usually work, you know there’s something we haven’t talked about just yet — mining. Miners play a vital role in the crypto market. They not only chip away at complex code to discover new coins, they validate transactions, and serve as a check against tampering.

Miners are literally the beating heart of the blockchain, and without them transactions would take a lot longer to validate. If there weren’t people “mining” the medical records blockchain, your records could take longer to update every time you visit a healthcare provider. If there weren’t enough computers working to keep things going, the MedRec system could become just as slow as the system it was designed to replace.

The MedRec team has an innovative solution — use researchers to mine the healthcare blockchain. In return for using the computing power to keep the blockchain going, researchers would be rewarded with access to anonymized medical data, would be a potential goldmine to life sciences and medical researchers.

Take your name off a lifetime’s worth of medical records, and there’s probably still enough to identify you.

However, even anonymized data is personal medical data. There may still be enough data to identify you. That’s why MedRec engages patients and providers to decide how much metadata they want to release. It’s a work in progress, but the MedRec team is confident enough people will be willing to share their anonymized metadata to make the system work on a large scale.

“We note a growing interest among patients, care providers and regulatory bodies to responsibly share more data, and thus enable better care for others,” the MedRec research reads. “[With MedRec] researchers can now obtain greater clarity in their investigations by earning census level, anonymized metadata in return for contributing the computational resources that sustain the network.

The future of EMRs

MedRec offers a novel approach to a widespread problem, and it’s an innovative use of blockchain technology. MedRec is just one potential solution, but it lays out a roadmap that gives us a look at what the future of medical records management could be. That’s not exactly the most exciting use of blockchain, but this is an issue that involves literally everyone.

EMRs and EMR management systems present a growing problem for healthcare providers and patients alike. Not only does an increase in clerical work contribute to physician burnout, but hospitals which participated in a similar interoperability program saw a ten percent downtick in overall risk-adjusted mortality.

When healthcare providers can’t get access to a clear, up-to-date picture of your medical records, mistakes can happen. If blockchain can help solve this problem, it might be worth forking over some anonymous healthcare data. Maybe.


Facebook
Twitter
Pinterest
WhatsApp
Previous articleThe creator of Javascript is using blockchain to save the internet from ads
Next articleIt’s no crypto-utopia. Blockchain has real problems to solve.
- Advertisment -