HomeNewsSamsung now offers a Chromebook Pro with a backlit keyboard for cave...
News 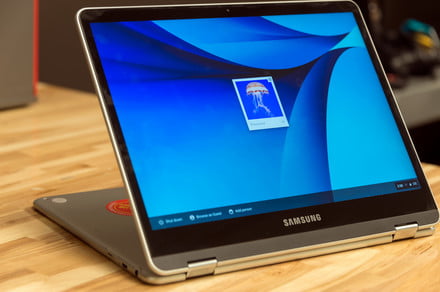 Samsung now offers a version of its Chromebook Pro with a backlit keyboard for the same price as the original model. To find it, just go to the company’s Computing/Chromebooks section on its website, where it lists all six Chromebooks Samsung has to offer. The only real difference between the two outside the illuminated keyboard aspect appears to be in the Bluetooth component, with the original packing Bluetooth 4.1 while the wireless keyboard version rolls back to Bluetooth 4.0 likely for cost balance reasons.

Samsung introduced the Chromebook Pro on May 28, 2017, designed for professionals. It was one of the first to ship with Google Play right out of the box, providing owners with the cloud-based benefits of Chrome OS, but also support for locally installed Android apps. Both aspects are backed by a 12.3-inch screen and a 360-degree hinge supporting Laptop, Stand, Tent, and Tablet modes.

Nearly a year later, the backlit version of Samsung’s Chromebook Pro still relies on Intel’s sixth-generation Core m3-6Y30 processor released in the third quarter of 2015. That said, the dual-core chip is showing its age given we’re knee-deep in Intel’s eighth generation, sporting a base speed of 900MHz and a maximum speed of 2.20GHz. Then again, Chrome OS isn’t a highly demanding operating system like Windows 10, so you really don’t need the latest, fastest chip on the planet designed just for mobile.

As the list shows, Samsung’s Chromebook Pro includes 4GB of LPDDR3 (aka low-power memory), 32GB of flash-based storage, and a Micro SD card slot for additional storage. You’ll need that slot given the Chromebook supports Google Play, as Android apps will quickly consume your 32GB of internal space and you’ll need extra room for your downloaded media.

Other notable features outside the backlit keyboard include a built-in 720p webcam, two USB-C 3.1 Gen1 ports, a headphone/microphone combo jack, Wireless AC connectivity up to 867Mbps (2×2), and Bluetooth 4.0. The audio aspect is provided by a Realtek component powering two 1.5-watt speakers. All of this is backed by a 39WHr batter promising up to nine hours on a single charge.

“Samsung Chromebook Pro’s sleek and lightweight design with the rotating display lets you switch from tablet to notebook anytime and the built-in Pen is ergonomically designed to write or draw naturally, never needing a charge,” the company says. “Featuring a high-resolution Quad HD touchscreen display, users can experience vivid pictures and immersive viewing with bright videos.”

Samsung’s Chromebook Pro variant with a backlit keyboard is available now for $599 on Samsung’s website. Also, check out our review of the original model.