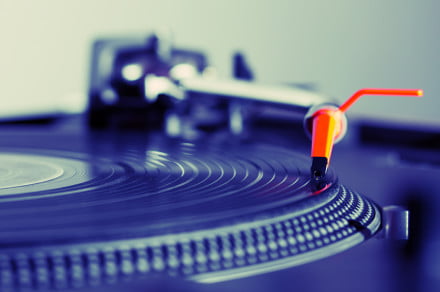 Vinyl records are in the midst of a surprising renaissance, fueled not only by millennial nostalgia but by high-tech turntables. As CD and digital music sales continue to decline due to online streaming services like Spotify, CNBC reports that vinyl LP sales have increased to 13 million in 2016 — their highest level since 1991.

Now, an Austrian start-up named Rebeat Innovations is hoping to give the venerable medium itself a high-tech boost with an innovation it’s calling “high-definition vinyl.”

Pitchfork has a rundown on the new process, which involves digital audio conversion and the use of lasers to engrave the ceramic “stamper,” the master component that creates the grooves on the record during the manufacturing process.

The company filed a patent in 2016 for “3D-based topographical mapping combined with laser inscription technology,” which it says will reduce the manufacturing time by 60 percent.

Loibi hopes to make a big splash at the upcoming trade show in Detroit. “Our goal is to officially present our test stampers at the Making Vinyl conference in October,” he said. “It will take another eight months to do all the fine adjustments. So by summer 2019 we shall see the first HD vinyls in the stores.”

What’s more, backward compatibility is built in — the new HD Vinyl albums can be played on any current turntable.

Rebeat also has its eye on creating their own line of HD turntables, which it says will maximize audio playback and allow additional features such as digital metadata.

It seems like there’s no better time to start your own vinyl collection. Although the old-school analogue format only makes up 11 percent of album sales, vinyl is attracting a new generation of music lovers. “Now with the internet and instant gratification, the younger record fans still love the feel and sound of a physical artifact,” said Miriam Linna of the independent label Norton Records. “It’s highly personal.”

“It’s a pleasure to watch the label go around, to marvel, as I do with every record I spin, on the magic of a rotating piece of plastic, and how it can cause us to laugh, cry, fall in love, or jump for joy,” she added.