Cambridge Analytica designed cryptocurrency to sell back your personal data 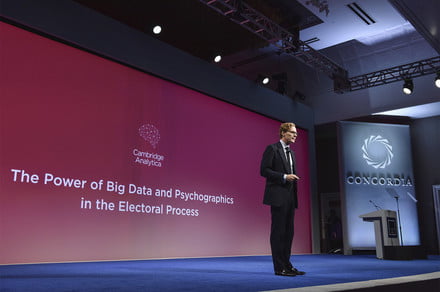 In a twist of irony, Cambridge Analytica — which worked on Donald Trump’s digital campaign strategy and was the subject of scandal for Facebook — had been quietly working on its own virtual currency designed for an initial coin offering, or ICO. Cambridge Analytica’s cryptocurrency was conceived as a means to pay for a system allowing people to store and sell their online data to advertisers, former employee Brittany Kaiser told The New York Times in an interview, essentially allowing people to protect the data that the company had exploited from some 87 million Facebook users.

Cambridge Analytica promoted its virtual currency business to blockchain companies wishing to use predictive modeling to target investors. The psychographic profiles that the company has created allow for more precisely targeted advertising.

“Who knows more about the usage of personal data than Cambridge Analytica?” Kaiser said in an her interview. “So why not build a platform that reconstructs the way that works?”

Work for the virtual currency began in the middle of last year, with Cambridge Analytica aiming to raise as much as $30 million through the ICO, according to Reuters.

“Prior to the Facebook controversy, we were developing a suite of technologies to help individuals reclaim their personal data from corporate entities and to have full transparency and control over how their personal data are used,” a Cambridge Analytica spokesperson said in an email statement to Reuters. “We were exploring multiple options for people to manage and monetize their personal data, including blockchain technology.”

Jill Carlson, a consultant for several blockchain companies who had attended pitch meetings with Cambridge Analytica, said that the company’s approach “was contrary to the ideas of openness and transparency that drew her to virtual currency projects like Bitcoin,” according to the Times report.

“The way that Cambridge Analytica was talking about it, they were viewing it as a means of being able to basically inflict government control and private corporate control over individuals, which just takes the whole initial premise of this technology and turns it on its head in this very dystopian way,” Carlson said.

In one instance, Cambridge Analytica would send virtual currency to different areas in Mexico as incentive for people to fill out surveys. The data would be used to design political campaigns for Mexican candidates running for office.

“A spokesman did not comment on the coin offering, but did say the firm was looking at using blockchain — the technology underlying digital currencies — to help people secure their online data,” Reuters reported.

Kaiser is pursuing similar ideas in her new role at Bueno Capital.