HomeNewsLook out, Alexa and Google Assistant — Watson Assistant is coming for...
News

Look out, Alexa and Google Assistant — Watson Assistant is coming for you 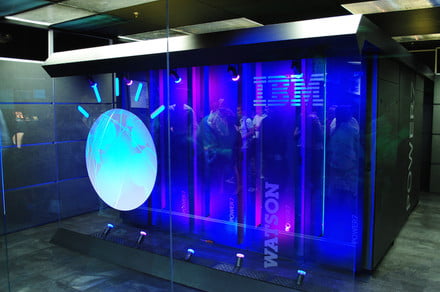 Alexa and Google Assistant may be helping you to run your household today, but now that IBM Watson has officially joined the smart home game, it might be game over for some of these competitors. Watson, the supercomputer that has won Jeopardy!, helped Marchesa design a dress, and analyzed tennis matches at the U.S. Open, is now coming to your home — but not just your home. At IBM’s annual Think conference, the company unveiled the Watson Assistant, an intelligent helper that you could soon find not only in your house, but in your car, office, hotel, or just about anywhere else.

One of the key differentiating factors between Watson and all other smart assistants is its status as a white label product. That means that there’s no specific way in which to use Watson Assistant — there is no set wake word, nor a dedicated smart speaker in which the assistant will live. Rather, companies will be able to leverage Watson however they see best, making it easier to add actions and commands. And perhaps most importantly, every individual application of Watson Assistant will keep its data to itself, which means that large companies can’t, as The Verge notes, “pool information on users’ activities across multiple domains.”

As IBM’s vice president of Watson Internet of Things, Bret Greenstein, explained to The Verge, “If you start running the entire world through Alexa, it’s an enormous amount of data and control to give to one company.” But Watson Assistant hopes to avoid that situation.

The artificial intelligence tool is already in action across the world — for example, if you travel to Munich Airport, you can see a Watson Assistant-powered robot that will give you directions and gate information. BMW is also leveraging the technology to rate an in-car voice helper. “We looked at the market for assistants and realized there was something else needed to make it easier for companies to use,” Greenstein told CNET.

Of course, as impressive as Watson has proven itself to be, it still has quite a bit of ground to make up when it comes to incumbents in the space like Alexa and Google Assistant. But IBM notes that Watson Assistant was developed exclusively in response to customer requests for this functionality. Particularly business customer requests. Greenstein noted that companies dealing with sensitive information will likely be more attracted to Watson than existing assistants because Watson gives users more control over both customer information and the customer experience.


Facebook
Twitter
Pinterest
WhatsApp
Previous articleHackers could have credit card numbers of 880,000 Orbitz users
Next articleStanford’s VR experience puts you in the shoes of one of California’s homeless
- Advertisment -