Have a big group chat? Messenger adds admin tools and links for groups 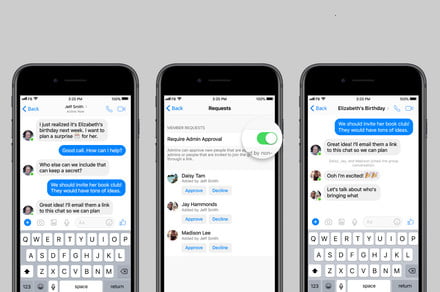 Group chats are so popular in Messenger that Facebook says around 2.5 million new groups are created every day on the platform. That is why the social media platform is launching new tools directed specifically at group chats. Group messages now have options to set an administrator or share a link to allow others to join. Facebook announced the new chat options on Wednesday, March 21.

The first feature allows a group chat to set an administrator, bestowing this user with the power to approve new members or remove members. The option to approve new members is designed for chatting with new people — as an example, Facebook cites planning a surprise birthday party with a few different circles of friends.

Messenger users can choose whether or not to require administrator approval for new members. Administrators can also remove administrator privileges from other users if necessary, Facebook said. By default, the admin tools are off, but users that want the ability to approve new members can access the settings to turn on the feature.

Along with adding administrator features to keep group chats on track, Messenger will allow the group to create a shareable link for other users to join. Called custom invite links, the feature allows users to easily invite another person to join the chat. Without administrative control on new members, the link can allow new users to be added automatically while toggling the option to approve new users means even link-clickers have to get approval before joining.

Messenger Groups can contain as many as 250 people (how endless would those notifications be?), with voice and video chats allowed for up to 50 people.

The new group-focused tools join what will likely become a long list of newly added features for the messaging app. Earlier in 2018, David Marcus, the vice president for Messenger, shared a list of predictions suggesting several changes that could come to the platform this year. Last month, an update added a shortcut for making group calls while last year’s list of updates includes 4K support, recommended chatbots and more. Meanwhile, the slimmer Messenger Lite just gained video calling.