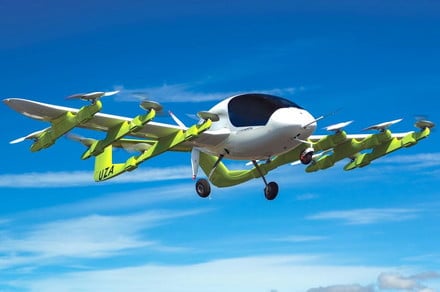 So-called “flying cars” have come a long way since 2011 when this Russian guy stuck a pair of wings on the side of his own aging motor before screaming down the runway (at 60 mph) and hoping for the best. Remarkably, the contraption flew for 180 meters, though it could only reach an altitude of 3 meters.

While the then 72-year-old driver of that 1987 ZAZ Tavria car likely invested much of his retirement money in his pet project, some far bigger beasts with much deeper pockets have since entered the race to build a truly viable “flying taxi” for short city hops as well as longer rides.

One of those with a dream of creating such a flying machine is Google co-founder Larry Page. He’s been lending support to the development of the Kitty Hawk Flyer, an ultralight electric aircraft that’s essentially a large octocopter with a seat and steering controls. But this week we learned that the team behind the Flyer has a far more ambitious design in the works — Cora.

The cool-looking two-seat machine features 12 wing-mounted rotors to enable vertical take-off and landing, and a large pusher-prop to help it fly like a regular airplane.

Cora, which was unveiled this week and is currently undergoing flight tests in New Zealand, is fully electric and autonomous. It can carry up to two passengers, has a reported range of 60 miles, and a top speed of 93 mph. Operating with a noise level far below that of a helicopter and without the need of a runway, the aircraft could take off and land in busy urban settings without causing any great disruption to people in the vicinity.

The plan is to use Cora for a commercial flying taxi service in New Zealand, launching before 2022. The antipodean nation has been chosen because of its more relaxed approach to regulation for such projects, and the development of vehicles like Cora will help the country toward its ambition of net zero emissions by 2050.

The team behind Cora is led by Kitty Hawk CEO Sebastian Thrun. He’s one of the folks who helped launch Google’s autonomous car unit — today called Waymo — and who recently hit the headlines for a new “flying car” nanodegree course at online education outfit Udacity.

“We know the technology [for a flying taxi] is feasible because we are already doing it,” Thrun said in a video (above) highlighting his latest project.

There’s certainly plenty happening in the flying-taxi space just now. Last month we saw the first test flight of the Airbus-backed Vahana self-piloting air taxi, and also learned more about EHang’s progress with its 184 flying machine. Uber is developing its own aerial vehicle, too, while Joby Aviation and Volocopter are working on their own vehicles with an eye on an airborne taxi service.