Gaming-focused Logitech G560 may be most immersive computer speakers ever 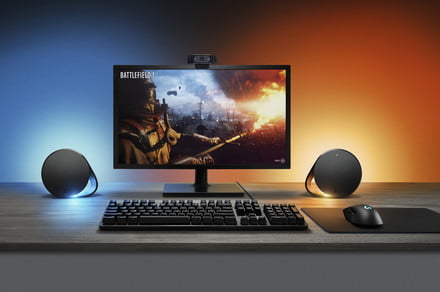 Products with the Logitech G label — one of four brands under the Logitech umbrella, focused on equipment for gamers — aren’t always “cool,” even if they’re good. Last August, the company released a gaming mouse and keyboard with ordinary designs, eschewing flashy lights and futuristic builds altogether.

The new G560 speakers, however, are built with both style and substance. The 2.1-channel system includes a downward-firing subwoofer and two custom-tuned satellite speakers, each of which are outfitted with two RGB LED zones — one facing backward, intended to splay onto the wall behind your PC, and one that shines behind the grille in front.

The G560 support DTS:X Ultra surround sound imaging (which you can toggle on and off), and reach a peak of 240 watts. You can connect via USB, 3.5mm aux, or Bluetooth (you can connect two devices simultaneously via Bluetooth). The “G” key on the satellite speakers can control macros if you set them up in the Logitech G software; by default, the button adjusts LED brightness.

The G560 are designed with an open software development kit (SDK), which means game developers can actually program in scenes based upon events that happen in-game. For example, Epic Games has already built in support for its ultra-popular Fortnite Battle Royale,  so when players find themselves caught in “the storm,” all of the lights will immediately turn purple, immersing the player further into the experience. Developers can use this kit to transform the lights into indicators for health bars, ammo counts, or pretty much anything else you can think up.

That might sound limiting — after all, you can’t expect every game studio to implement such features — but the G560 have some neat tricks to improve your experience with other games, too. The software allows you to choose between five different color effects, including “audio visualizer” (which works with any audio source) and “screen sampler,” an awesome mode that allows you to select four different rectangular areas on your screen and assign those areas to the four RGB zones. The software will then pull whatever color appears most in a given area and change the LED colors accordingly. So, if your character is wandering through a forest, your lights will shine green — even if the developer hasn’t utilized the SDK.

The G560 are available for pre-order as of March 15, and will begin shipping later in the month. They retail for $200.

Want a MVNO that uses T-Mobile? Here are the best options.