HomeNewsFed up with GPU prices? Crypto-rig builder says gamers must suck it...
News

Fed up with GPU prices? Crypto-rig builder says gamers must suck it up and mine 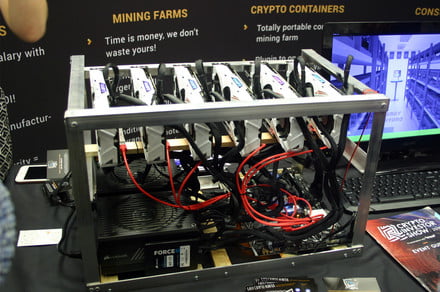 At a recent cryptocurrency investor show, one mining rig builder told Digital Trends he thinks the best way for gamers to offset the inflated cost of graphics cards is to mine cryptocurrency in their spare time. By his reckoning, most cards can pay for themselves in just over a year.

Although the peak value of many cryptocurrencies may be months behind us at this point, the mining boom that was born off of the back of it shows no sign of abating. In turn, graphics card prices remain ridiculously inflated. Even obsolete cards are selling for more than double their launch prices, as availability plagues gamers and miners alike.

While miners look to make a profit on their expensive investment, gamers just want to have fun. That’s not the tack they should be taking according to Easy Crypto Hunter‘s founder and Managing Director, Josh Riddett. During a sit down with Digital Trends at the London Crypto Investor show, he suggested gamers should be mining, too.

“I totally feel for them, I get it. I am an avid gamer myself,” he said when asked how he felt about the impact businesses like his were having on graphics card pricing and gamer upgrade limitations.

“I’ve spent a lot of my life gaming, I love it. I’ve made a lot of great friends in the online world. The reality of it is [though], no one rides horses when they’ve got cars,” he said. “Sometimes you’ve got to move with the times. At the end of the day, I appreciate that a graphics card will now cost you twice what it did before, I get that and it sucks, but it can also pay for itself in a year. So it’s kind of swings and roundabouts. It’s very easy to leave your computer mining overnight when you’re not using it, and effectively the graphics card will pay for itself.”

Riddet’s four-month-old business does deal exclusively in GTX 1080Ti graphics cards, and purchases in bulk from both distributors and manufacturers. That’s not a card that many gamers would have been buying, in any case, because of its high MSRP. However, there is a trickle-down element to that. If other miners and gamers can’t buy those cards, they’ll buy the next ones down the list, and the mid-range has already been decimated by miners building more energy-efficient rigs.

If gamers were willing to mine, however,  Riddet thinks they’d easily offset the cost of the card. “[Graphics cards] are harder to get [and] three years ago the prices were cheaper,” he admitted, “but three years ago the card couldn’t pay for itself. Now it can. It’s more money up front, but I’d argue less money out of your pocket in the long run.”

Riddet’s take seems a bit self-serving, but also offers some insight into the world of cryptocurrency hardware. His perspective makes it clear the companies building crypto-mining rigs still enjoy more than enough profit, despite the fact Bitcoin’s price is at roughly half its peak value. Gamers may not like his advice — after all, most don’t want to hassle with mining a cryptocurrency. If AMD and Nvidia can’t find a way to build and distribute cards at more reasonable prices, though, gamers may not have a choice.