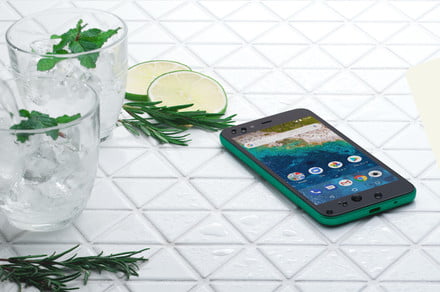 The Android One program is slowly but surely growing, and the latest one is sure to appeal to those looking for a decent midrange phone that offers a stock Android experience. The device comes from Sharp, and is called the Android One S3.

Perhaps the most notable thing about the phone is its design, and, as per GSMArena, it’s got a pretty familiar look. Many will remember the iPhone 5c, a so-called “budget” iPhone that came in a range of different colors, and didn’t last all that long. The Android One S3 comes in four different colors, including green, black, white, and pink.

Under the hood, the phone features some pretty decent specs. The phone has a Qualcomm Snapdragon 430 processor, coupled with 3GB of RAM and 32GB of storage — though you can get more storage through the MicroSD card slot. The display is a 5-inch display with a 1,080p resolution.

There are some features missing though. You won’t get a fingerprint sensor, which is a little strange for a midrange phone these days. It does, however, offer MIL-SPEC water and dust resistance, so that’s perhaps why it costs a little extra than equivalent phones. And, of course, it offers Android One, which is a stock version of Android that only comes with Google apps pre-installed and should get timely updates.

So when and where can you get your hands on the phone? Unfortunately, it’s only available in Japan, where it costs 32,400 yen, or around $300. If you live in Japan, you can get it through the Y!mobile carrier.

For that price there are some other pretty great options, and some of them are even part of the Android One program. For example, we rated the HTC U11 Life as one of the best midrange phones out there, and while it doesn’t offer MIL-SPEC water resistance, it does at least boast an IP67 rating, which should be enough for most uses. Other phones, like the Lenovo Moto G5S Plus, are far better budget options, offering better processing power and more storage than the Sharp Android One S3. Still, the interesting design and stock Android software may be enough to push people into buying it.