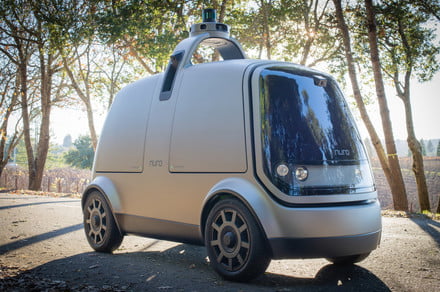 For decades, ever since the “horseless carriage” came to fruition, engineers and scientists alike have dreamt of a future filled with self-driving vehicles. And in an age where traffic fatalities, particularly ones caused by inebriated or incompetent drivers, are still a rampant, risk, autonomous vehicles are perceived as the solution to eliminating such problems.

But like all new technologies, many if not all need to endure growing pains and there are a lot of considerations that need to be accounted for since autonomous vehicles require some big-time changes. This is why autonomous vehicles aren’t quite yet readily available. But these growing pains are the perfect times for experimentation and they clearly haven’t stopped two ex-Google engineers, Dave Ferguson and Jiajun Zhu, from developing their own self-driving car.

This means Nuro’s vehicles are specifically being developed to take on the roles of delivery drivers. Yup, Nuro appears to want to make pizza delivery guys and Seamless couriers a thing of the past, all in an effort to reduce traffic congestion and the number of people on the road, which in theory could reduce the total number of traffic accidents.

With services such as Seamless or even Amazon Same-Day-Delivery increasing by demand, this means the number of couriers needed to cater to said demand will likely increase. So far, a study by marketing firm McKinsey discovered that the market for “last-mile delivery services” was last valued at over $86 billion, with huge year-over-year growth rates.

Speaking of which, Amazon sees so much potential in the last-mile-delivery service industry, they are not only working with drones. More recently, Amazon recently filed a patent for an “autonomous ground vehicle,” suggesting their rumors of self-driving robots are reigning true. On the other side, last August, Ford announced its partnership with Domino’s, collaborating on pizza deliveries using self-driving cars.

So Nuro isn’t alone with its vision. But they’re also not resorting to a collaboration with a pre-existing automaker, such as Uber’s self-driving Volvo fleet, Lexus’ and Toyota’s fleet of self-driving testers for Google, or as aforementioned, Ford’s new fleet with Domino’s.

“Local commerce is the first application. The vehicle will transport goods between and among businesses, homes, and neighborhoods,” Nuro spokesperson Emma Esrock told Digital Trends.

“Particularly, we’re interested in the last mile of transportation. That element contributes to 30 to 50 percent of the total logistics cost of goods transportation. In solving that problem, we realized we could create an entirely new kind of vehicle designed purely for goods transportation and reduce this cost. And, this sort of vehicle could also be created sooner, more efficiently and safer than passenger transportation. Because of its flexible interior, the vehicle can be re-configured and personalized for purpose in that delivery.”

Instead, Nuro is creating its own self-driving car, completely from the ground up. Upon first glance, it doesn’t seem like anything more than a rounded box on wheels. It does have a forward-facing windshield. But behind it is where the R1’s operational equipment lies. And it doesn’t have to be if nobody’s technically going to be driving in it, and thus being seen in it. Instead of a passenger compartment, the car’s interior space can be customized to suit a company’s needs. The interior is then accessible by four gullwing-style doors.

Details about what exactly powers it and how fast it can go aren’t yet available. But according to The Verge, researchers initially wanted the R1 to be small enough to drive on sidewalks. In the end, however, Nuro ultimately decided to make the R1 road-worthy. As it stands, it’s about as tall as a Toyota Highlander (with its antenna support), but about half as wide.

“The unmanned vehicle is custom-designed from the ground up to be safer, nimbler and more efficient than anything on the road. It features lightweight materials, narrow width, custom hardware for redundancy and a breakthrough design to keep what’s outside even safer than what’s inside,” Esrock said.

As of now, the Nuro is about ready to be launched, Esrock said that we should expect to see these in your neighborhood, both “urban and suburban,” shortly.


Facebook
Twitter
Pinterest
WhatsApp
Previous articleThis ‘drone gun’ can down rogue quadcopters with the pull of a trigger
Next articleTicwatch E review update: back in black