The best VR-ready laptops you can buy right now 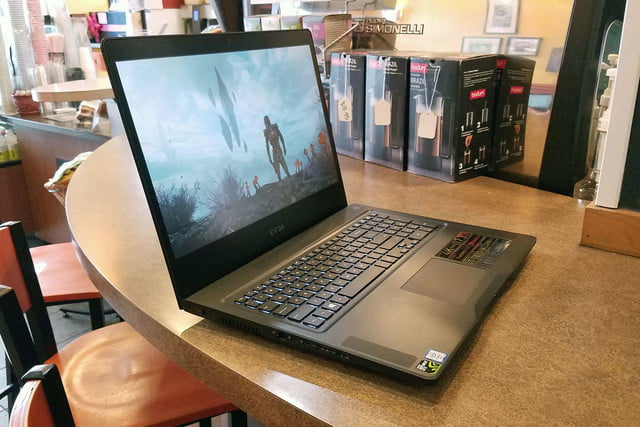 Typically, a high-definition virtual reality experience requires a headset tethered to a PC. Desktops immediately come to mind given their hardware, but you can have the same experiences on a laptop with the right configuration. Not all PCs can support high-definition VR, whether they don’t meet the graphics requirement, or there just simply aren’t enough ports to handle the tethered connections. We help you find the ideal solution with our roundup of the best VR-ready laptops.

To find the ideal solutions, you first look to the actual headsets. The HTC Vive and Oculus Rift require specific hardware components to run at a decent rate, as anything lower could produce a poor, vomit-inducing experience. We’re not kidding either, as virtual reality needs to sustain a rate of 90 frames per second else you could suffer from motion sickness. That said, you need to take the minimum requirements seriously.

Our list focuses on laptops with discrete graphics chips – not integrated graphics – and a port complement that can support headset connections. Thickness, weight, screen size, and resolution really aren’t a deciding factor unless you plan to pack up your VR setup and move it to a friend’s house, or you simply want to enjoy high-definition games headset-free. Our laptops range in weight and thickness, which grows in size as the hardware specifications grow closer to desktop-like performance.

Razer’s non-Pro laptop lands in our top spot because it’s the lightest and thinnest in our batch, weighing in at 4.10 pounds and measuring 0.70 inches thick. That’s not bad given the laptop’s gaming roots, as game-focused models can typically get bulky and cumbersome to carry due to all the desktop-class hardware stuffed inside. Razer intentionally set out to provide a somewhat thin and light solution, and succeeded with its most recent Blade-branded model.

Razer’s laptop meets the minimum requirements for the HTC Vive and Oculus Rift, relying on a seventh-generation Intel processor and a discrete GeForce GTX 1060 graphics chip manufactured by Nvidia. The only configurable options served up with the Blade consist of 1,920 x 1,080 and 3,840 x 2,160 screen resolutions, and a choice of three storage capacities via a PCI Express-based M.2 stick-shaped SSD: 256GB, 512GB, or 1TB. That said, a “fully loaded” Blade laptop will set you back a hefty $2,799. Yikes.

As for the other ingredients, the Razer Blade includes a built-in 2MP camera, two speakers supported by Dolby Digital Plus Home Theater Edition, and a handful of connections consisting of a Thunderbolt 3 port, three USB-A 3.1 Gen1 ports, one HDMI output, and a headphone / microphone combo jack. Wireless connectivity includes Bluetooth 4.1 and Wireless AC networking. A 70WHr battery and an external 165-watt adapter powers this laptop.

You can read our full review here.

According to the specifications, all four starting points rely on IPS-based screens with a choice of 1,920 x 1,080 and 3,840 x 2,160 resolutions. They’re backed by 8GB or 16GB of system memory, two built-in MaxxAudio Pro speakers, a 56WHr battery and an external 180-watt power supply. Storage capacities consist of 256GB and 512GB on a PCI Express-based NVMe M.2 SSD, and an optional 1TB hard drive spinning at 5,400RPM.

You can read our full review here.

EVGA actually serves up three SC17 models: two with Nvidia’s GTX 1070 discrete graphics chip, and one with the GTX 1080. The two GTX 1070 models recently took a price cut, with the cheapest solution now costing a mere $1,299. Given the laptop originally cost $2,799, you have to wonder why EVGA hacked the price. The answer may reside in the laptop processor used in the GTX 1070 models: a sixth-generation Core i7-6820HK. That’s not a bad chip at all, but EVGA may very well be in the process of moving stock to make room for eight-generation models. The sole GTX 1080 model relies on a newer Core i7-7820HK CPU.

Where the 1070 and 1080 models differ is in the port complement. On the two 1070 models, you’ll find one HDMI port, two Mini DisplayPort connectors, one Ethernet port, one USB-C 3.1 Gen1 port, two USB-A 3.1 Gen1 ports, and a microphone / headphone combo jack. For the 1080 model, EVGA ripped out the USB-C port and replaced it with a USB-A version, and split the microphone and headphone connections into two separate 3.5mm jacks. All three measures 1.07 inches thick and weigh 8.92 pounds.

You can read our full review of the 1080 model here.

Similar to EVGA’s SC17, Acer provides three versions of its Predator 17 X VR-ready laptop. All three consist of 17.3-inch screens, seventh-generation Intel Core processors, and Nvidia’s GeForce GTX 1080 discrete graphics chip. Resolutions span from 1,920 x 1,080 to 3,840 x 2,160, depending on the model, along with 16GB or 32GB of system memory. Unfortunately, you can’t configure these laptops to your specific needs.

As for the other ingredients, storage options include a 256GB or 512GB SSD for the operating system, and an additional 1TB hard drive for storage (and your overflow of installed games). The laptop actually sports four integrated speakers along with an SD card slot, an Ethernet port, an HDMI port, four USB-A 3.1 Gen1 ports, one USB-C 3.1 Gen1 port, and a DisplayPort connector. That said, you have a plethora of ports for connecting your VR headset, and then some.

Acer’s laptop is the heaviest and thickest VR-ready laptop on our list, measuring a hefty 1.8 inches thick and weighing 10.03 pounds. It’s still no desktop, but could feel a little cumbersome if you want to take your VR experiences outside the home. Acer’s laptop relies on a 6,000 mAh promising up to three hours on a single charge, and an external 330-watt power supply. Acer mentions Wireless AC connectivity, but no Bluetooth (possibly included).

You can read our full review of the 2016 model here.