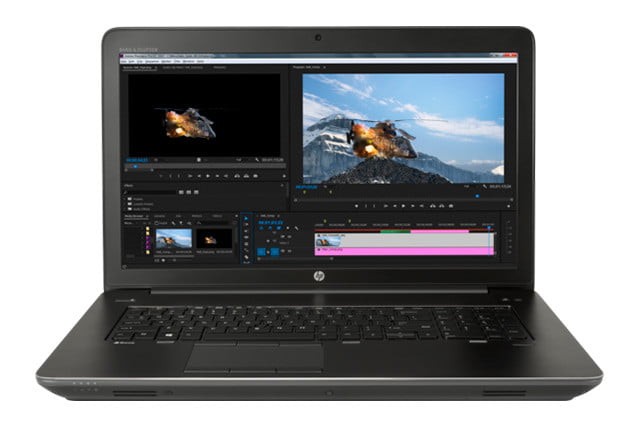 While gamers consider themselves at the pinnacle of PC performance, the budgetary constraints of even that consumer group means it will always fall behind the true power-users of the world: the workstation users. Whether you’re running CAD software, complex simulations, or video editing, you need a workstation that’ll give you all the power and operational longevity that you need.

That’s what this guide will teach you all about. We’ve scoured the product listings and testimonials all across the web and combined it with our not-inconsiderable experience to bring you a list of the best mobile workstations available today.

HP has provided some fantastic consumer laptops in recent years and that pedigree extends to the workstation space too. As much as it has a number of solid workstation options though, the ZBook 17 G4 is our favorite of the bunch, with a combination of powerful hardware options, a large display, USB Type-C ports, and manageable weight.

Starting at $1,350 and peaking at $3,570, the HP ZBook 17 G4 can come with anything from a seventh-generation Core i7 7300HQ CPU, right up to an Intel Xeon E3-1535M. Depending on the model you opt for you can have up to 64GB of memory, Intel HD or Nvidia Quadro graphics with up to 16GB of dedicated GDDR5 video memory, and a couple of terabytes of storage space in solid state and hard-drive varieties.

You can also opt for displays from a 1,600 x 900 LED screen, all the way up to a full-4K Dreamcolor anti-glare panel.

All models come with a 96-watt-hour battery, which should be good for a long stretch of time in the right circumstances, and each model weighs in at 6.9 pounds before extras.

The combination of a large battery, powerful internal hardware, and reams of options, make the HP ZBook 17 G4 a fantastic choice for whatever tasks you’re taking on. It’s not as specific as some of the other entries on this list, but it’s a mobile workstation that will do anyone proud.

Although its standard builds are a little more restricted than HP’s, Lenovo’s Thinkpad P71 has plenty of options for those looking for a mid-range to top-tier workstation solution. With a choice of Intel Core i7 and Xeon E3-1535M CPU, up to 64GB of RAM, and more than a terabyte of solid-state storage space, there is plenty of general performance to be had. Combine that with up to a Quadro P5000 with 16GB of GDDR5 for graphics, and you have a powerful system capable of taking on anything you throw at it.

That’s not to say you have to spend a mint, though. Don’t need a 4K display? Go for the 1080P option instead. Prices start at $1,343 and can range all the way up to more than $5,000, so there is plenty of scope for fitting a Thinkpad P71 to your budget and hardware requirements.

Also of note is the default operating system options that this mobile workstation comes with. You can opt for a Windows 10 installation, but there are also options for Ubuntu and Red Hat Enterprise Linux installs too.

If you want to expand its capabilities in the future, Lenovo also has a number of accessories, ranging from external DVD drives to workstation docks, with support for additional display connectivity.

If you need an extremely light mobile workstation, Dell’s Precision 5520 should definitely be on your radar. At under four pounds, this is the lightest laptop on this list, and it’s rather compact, too. The 1080P versions do come with just 56 watt-hour batteries, but the 4K version has a 97 watt-hour version, which in our tests was able to keep the system running for more than five hours.

Options beyond the display resolution include a range of Intel Core processors, with i7 and Xeon CPUs to choose from. You can go up to 32GB of RAM if you need, and there are options for up to a terabyte of PCI Express solid-state storage. The only limiting factor in this workstation’s customization is with the graphics, which are either Intel HD or Nvidia Quadro M1200 only.

Pricing for the Precision 5520 starts at $2,000, and can set you back upwards of $3,700 if you opt for a high-end edition. However, at the time of writing (and regularly otherwise) Dell offers enormous discounts, in some cases as much as 40 percent, so if you time it right you will be able to snag yourself one of these systems at a comparative bargain price.

Although not technically classed as a workstation, the Surface Book 2 is one of the most versatile workhorse laptops we have come across in a long time. Its hardware is no way near as impressive as some of the other entries on this list, but with its extremely long battery life and a powerful processor/memory combination, it will perform a variety of intensive tasks for much longer than most.

The Surface book 2 is also incredibly versatile. Its “dynamic fulcrum” hinge means that you can completely detach the screen from the keyboard, giving you an extremely portable tablet as and when required — it weighs in at just 1.7 pounds in tablet mode. Better yet, with a battery life that lasted as long as 20-hours in some of our tests, you don’t need to keep yourself near a socket to get the most out of your device.

Who said that a mobile workstation can’t be fun and good looking, too? While the Razer Blade doesn’t quite have the internal hardware to match some of the other systems on this list, it’s far from a pushover, and it’s much prettier than most. It packs powerful consumer-grade hardware into an attractive shell with features like keyboard backlighting and a slimline build, which could make it a great device to bring from home, especially if you like to game in your off-hours.

Internally, the Razer Blade Pro has a couple of different options, which differ depending on whether you opt for the “Full HD” version or the 4K version. With the Full HD you get an Intel Core i7-7700HQ CPU, with 16GB of memory, 256GB of solid-state storage, and a two terabyte hard drive. All of that is paired up with an Nvidia GTX 1060, which powers the 17.3-inch 1080P IPS panel, with a 120HZ refresh rate. Although that lineup is a little weak compared to some of the other entries in this series, it’s perfectly viable for less-intensive enterprise applications and at-home gaming.

The 4K version, however, ups the ante and offers a lot more at a higher price. It comes with an overclocked Intel Core i7-7820HQ processor that reaches 4.3GHz, 32GB of memory, up to two terabytes of solid state (RAID 0) storage, and an Nvidia GTX 1080 graphics chip. Better yet, its battery is upgraded from 70 watt-hours to 99 watt-hours. In our testing we still found battery life lacking, but it’s good that the option is there.

The Razer Blade Pro is a workstation that’s the best of both worlds. If you’re a gamer at home and can bring your system to work with you, it’ll do a good job, but if you need more raw power at the office, there are better alternatives on this list. Prices start at $2,300, though you can spend just shy of $5,000 at the top end.