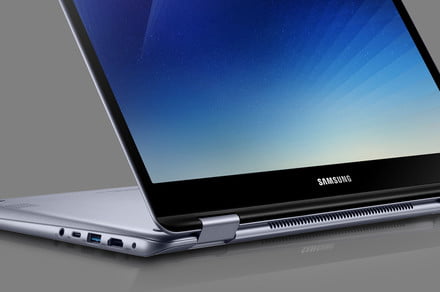 Samsung has dropped some details on its update to the Notebook 7 Spin ahead of CES 2018. It’s a Windows 10, 2-in-1 PC that’s getting upped to Intel’s eighth-generation processor and a SSD hard drive that promise to boost performance across the board.


Pricing has not been announced

Samsung’s Notebook 7 Spin was last updated in 2016 — and was a very different kind of 2-in-1. First off, Samsung offered a 15-inch version of the product (which is strange for a 2-in-1), and secondly, it was surprisingly high-powered, with a discrete graphics card, 12 or 16GB of RAM, and the Core i7 processor.

This time around, the Notebook 7 Spin’s specs look a bit more like many other 2-in-1s on the market. It’s got a basic 13.3-inch, 1080p display, a standard 8GB of RAM, and 256GB of SSD storage. thanks to the toned-down specs, Samsung shaved off some of the hefty weight and thickness this time around, while also slightly increasing the battery size up to a 43Wh unit. Although it hasn’t been specified, it appears that the Notebook 7 Spin will probably feature an integrated graphics card — so don’t expect to be able to game on this one.

The port selection is fairly similar this time around — one USB-C port, two USB-A ports, and an HDMI port. The only change is that Samsung appears to have chosen to remove the microSD card slot for its 2018 update.

The other big difference is that the 2018 version of the Notebook 7 Spin is built out of metal, rather than plastic. So while the silver design looks similar to its predecessors, the build quality has received a solid upgrade.

The 2-in-1 also features support for Active Pen use, though it doesn’t come with a stylus bundled in. The device does, however, still feature a backlit keyboard with 1.5mm of travel.

We haven’t received any pricing information yet, but the previous iterations of the 13-inch Notebook 7 Spin started at $800. It’s set to go on sale in the first quarter of 2018.